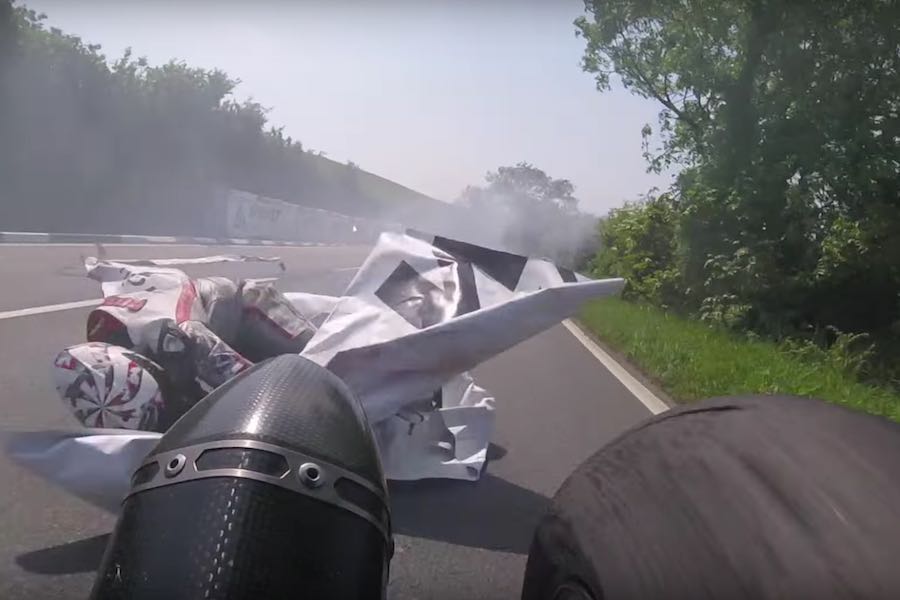 Saiger’s Near Miss at Isle of Man TT 2016 Video

Horst Saiger is a regular at road-racing events like the North West 200, Ulster Grand Prix, and the FIM Endurance World Championship. In 2013, he debuted at the Isle of Man TT with his self-owned Saiger Racing Team; that year, he just missed the Newcomer TT award to Josh Brookes.To say the Kawasaki Ninja ZX-10R pilot Saiger looks danger straight in the face goes without saying, but his latest encounter – and likely his scariest – occurred during the 2016 Isle of Man TT RL360 Quantum Superstock TT.While chasing Cowton Racing by Radcliffes BMW S1000RR pilot James Cowton, Saiger had one of the those holy SH$! moments. Just ahead of him, Cowton crashed into a left-hand turn near the 11th-mile marker of the 37.73-mile Mountain Course.Cowton hit the recticel crash barriers on the side of the track, and him and the plastic from one came sliding across the road. Saiger was forced to the left side of the track, and ran over a piece of plastic, just missing Cowton.After the TT, Saiger said: “Just two seconds behind Cowton, looked like he lost the front at a left-hand corner. I saw a bit of explosion in front of me, like fireworks. I had nowhere to go but the left side, and I had to drive through. I was just lucky!”Attached are two videos – the first above of the incident; the second below of Saiger’s response.For more, visit Ultimate MotorCycling’s Isle of Man TT page.