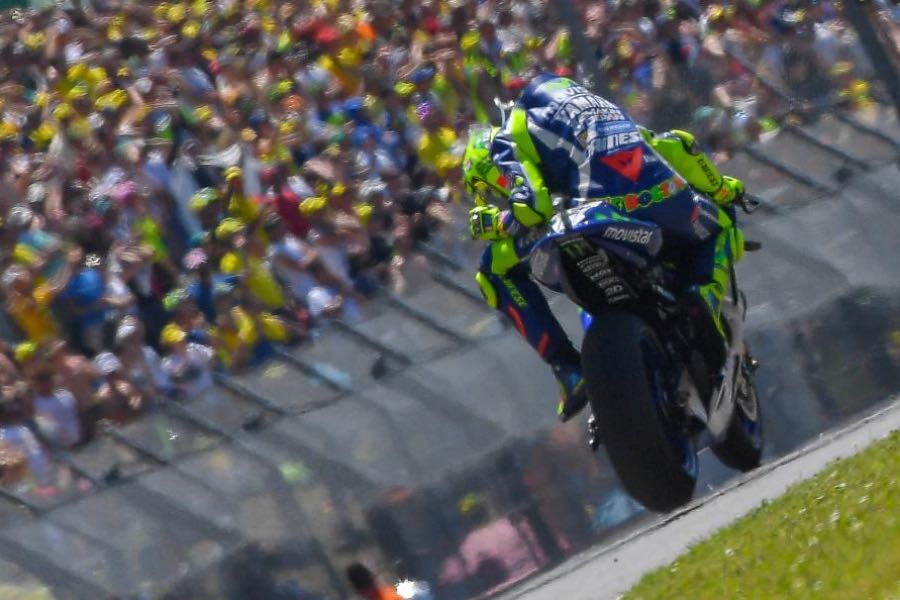 It was a day of Upsides and Downsides for the racers and the fans at the Italian Grand Prix. The Moto3 race at the Autodromo Internazionale del Mugello in Tuscany, Italy, was full of excitement, but crowd favorite Romano Fenati went out with a broken chain. Moto2 was a travesty of disorganization, and many top riders suffered, along with fans being robbed of watching all of the fastest racers contest for the lead. Still, it was a good race and worthy of an opening act.Over 100,000 people were waiting for the Gran Premio D’Italia TIM with high expectations. Nine-times World Champion Valentino Rossi was on the pole and nearly everyone in Tuscany was pulling for him to win at this most favored track. The crowd was going wild as Rossi and his Movistar Yamaha MotoGP Jorge Lorenzo battled like gladiators, until one was silenced, along with the boisterous crowd. Upsides and Downsides, indeed.

1. Valentino Rossi, Movistar Yamaha MotoGP. It was a dream Mugello for Rossi, starting from the pole in front of 100,000 of the faithful. Rossi was battling with his nemesis, World Champion Jorge Lorenzo for the lead when disaster struck. Just as Lorenzo’s motor had gone south in the morning, Rossi’s M1 engine grenaded on Lap 9, ending his day in a cloud of smoke. As important as sucking all of the oxygen out of Mugello, Rossi has now had two DNFs so far this year (the other an unforced crash in Austin) and he now trails Lorenzo by 37 points in the 2016 MotoGP standings.“It’s a great shame, because it’s always a pity when you have a problem with the bike in the race,” Rossi said, “but here even more so because it was in Mugello in front of all the crowd. I was very competitive in the race and very fast. I had a good start and I was there. I think I could have fought for the victory because I had a very good feeling and a strong pace. It’s also a great shame because this zero points score for the championship weighs very heavily.“Lorenzo and Márquez finished 1st and 2nd, so now the distance is hard, but it’s like this. The positive thing is that I was competitive over the whole weekend and I was strong. I could have fought for the victory, so now we wait for the next race in Montmeló (Spain). Catalunya is one of my favorite tracks. I like to race there a lot, so I think we will have a good potential, but now we have to wait ten days and after that we will see.”2. Pol Espargaró, Monster Yamaha Tech 3. He was pushed wide at the start and dropped back to 16th (not a disaster, as he was 14th on the grid), fought to 12th place, only to go down and pick himself up. Espargaró found himself fighting with Yonny Hernandez before finally pulling away to take just one point in Mugello. With that, he relinquished sixth place in the 2016 MotoGP standings to his brother, Aleix, who finished ninth.3. Tito Rabat, Estrella Galicia 0,0 Marc VDS Honda. Before arriving at Mugello, Rabat said, “I go to Mugello feeling positive and excited to ride a MotoGP bike at one of the fastest and most beautiful tracks in the world. It is a track I really like and I’ve had some success on in the past, but it will be a completely different challenge on a MotoGP bike.”Unfortunately, he broke his collarbone in Free Practice 3 and has had to have surgery. It has been a tough year for the reigning Moto2 champ, as he scored just 11 points in the first five rounds.4. Scott Redding, OCTO Pramac Yakhnich Ducati. Redding’s Pramac Ducati has failed him two weeks running, which can’t do much for his confidence. At Mugello, technical issues struck on the same lap that ended Rossi’s run.Scoring no points in four of the six races this year, Redding has just 16 championship points and sits 17th in the standings, a point behind teammate Petrucci who missed four races due to injury.“I have not made a mistake and from a certain point of view, I am satisfied with my performance,” said a cautiously upbeat Redding. “I also have to thank the team because the pace was very good. The problem? I saw the red light flashing, and I tried to slow down to see if the problem could be solved. But, there were no signs of improvement, so I preferred to stop to avoid damaging the engine. I am disappointed because the weekend had been good even if with some ups and downs. We will try again in Barcelona.”5. Jack Miller, Estrella Galicia 0,0 Marc VDS Honda. Miller simply cannot catch a break. In the first corner, he was caught in the three-rider pile-up with Alvaro Bautista (Aprilia Racing Team Gresini) and Loris Baz (Avintia Racing) and that was it for his day at Mugello. Six rounds in, Miller has scored just two 2016 MotoGP Championship series points.Photos by Alessandra Marovino