The 2016 MotoGP Championship marks Dani Pedrosa’s 11th season with the factory Repsol Honda team. But this stat will change – the 30-year-old Spaniard has extended his contract with Repsol Honda through 2018.Pedrosa, who has piloted Honda machinery his entire Grand Prix career, signed the deal just ahead of this weekend’s round in Mugello, which will be Pedrosa’s 250th career start in GP racing.Pedrosa debuted in 2001 aboard a Honda in the former 125cc two-stroke class; he went on to earn a 125cc title and two 250cc titles before joining the Respol Honda team in 2006. Though he never earned a title, he finished runner up three times (2007, 2010, 2012) and third an additional three times (2008, 2009, 2013).In total, he has more podium finishes than any other factory Honda rider – 142, which includes 51 victories, three less than Mick Doohan’s Honda record.“I’m very happy to be able to announce my renewal with the Repsol Honda Team. I’m very grateful to Honda for the trust they’ve shown in renewing with me for an additional two years. I think it’s best for me to continue with the company I was with at my very first race. I’m happy that the negotiations have been quick, and now I can just focus on racing. I want to give 100% this weekend at the Italian GP,” Pedrosa says. 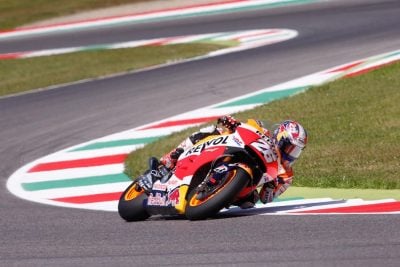 Shuhei Nakamoto, HRC Executive Vice President, says: “We’re very pleased to renew our contract with Dani, and we really appreciate his loyalty to Honda and HRC. We’ve been working together for many years, but we always see in Dani the same passion and dedication. His experience is very important for helping our technicians to develop our bike, and we’ll do our best to help him to demonstrate all his talent!”Pedrosa’s teammate, two-time MotoGP Champion Marc Marquez, is expected to renew his contract with Repsol Honda ahead of the the Barcelona Grand Prix.This news arrives after current Team Ecstar Suzuki GSX-RR pilot just signed with Movistar Yamaha MotoGP, replacing the vacancy left by three-time MotoGP Champion Jorge Lorenzo, who moves to Ducati for 2016. Vinales will join nine-time World Champion Valentino Rossi on the Yamaha YZR-M1.