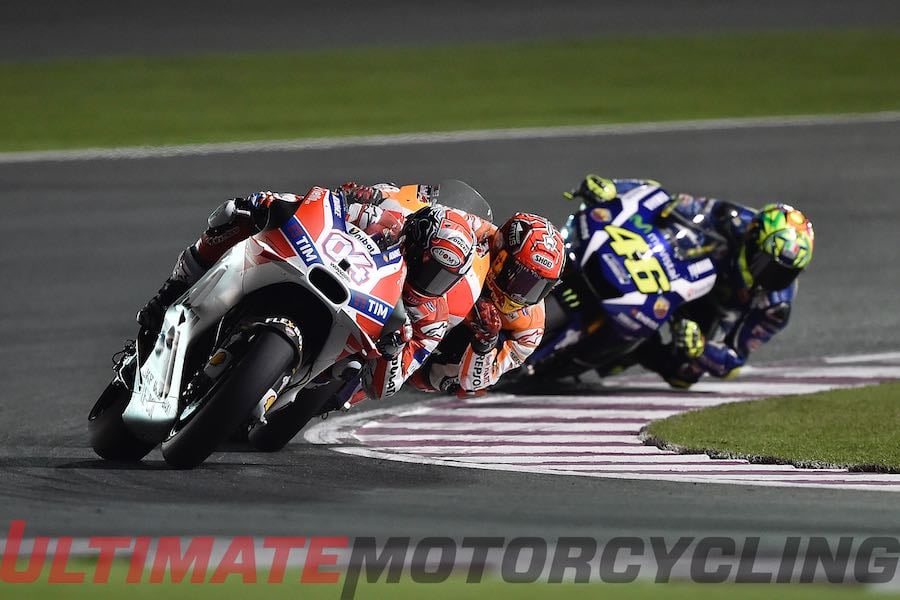 The 2016 MotoGP Championship begins a new era in the premier class of Grand Prix motorcycle racing. Gone are the Bridgestone spec tires (2009-2015), and in their place are the French-based Michelin. Also, all electronics are now unified due to the spec ECU from Magnetti Marelli.This changes challenged riders throughout the three 2016 preseason MotoGP tests, which had were led by Movistar Yamaha MotoGP’s Jorge Lorenzo (Sepang and Qatar) and Team Suzuki Ecstar’s Maverick Vinales (Phillip Island).What was immediately noticeable was the close finishing times across all manufacturers, and this also occurred throughout the free-practice sessions ahead of this weekend’s opening round at Losail International Circuit in Qatar. Lorenzo led the first and fourth free practices, and Ducati Team’s Andrea Iannone the second and third.Tight times once again were posted during qualifying when five-time World Champion Lorenzo earned his 62nd pole of his GP career, which began in 2002; this broke his tie with teammate Valentino Rossi for most poles. When qualifying was complete, the top 12 riders were all within a second of each other.Come Sunday, the riders were ready to truly begin this new era of MotoGP with 22 laps around the 3.34-mile containing 16 corners. From the looks of finishes throughout testing and qualifying, some tight times were expected. But they were far from tight. The reigning MotoGP Champion wasted now time, and capitalized on his pole position at Qatar MotoGP. He lead more than half of the race, and earned the first win of 2016 MotoGP. Lorenzo, who set a new Circuit Record Lap of 1:54.543mph, finished 2.019 of a second ahead of Ducati Team’s Andrea Dovizioso, and 2.287 of a second ahead Marc Marquez abaord the Repsol Honda RC213VS.This was Lorenzo’s 41st win in the premier class, and 62nd of his GP career.Jorge Lorenzo says: “We are there, in first position, without struggling and suffering and riding in the perfect way. For me, over all laps, this race has been one of the best of my whole career and that was why I was able to win and could make this little difference in the last three laps that gave me the victory.“It was a little down and up with the tires. We made the decision to put on the soft rear tyre, because with the hard one we couldn‘t be so fast. The harder compound should become better and better, but I think what happened was the opposite. The softer tyre should get worse and worse, but it was faster and faster so this little difference was the difference between me and Dovizioso and Marquez.“I was surprised how fast my pace was towards the end of the race. I was sliding so much, but at the same time I was very smooth and concentrated and made no mistakes and that‘s why even with the pressure from Dovizioso, when I was at a margin of 0.4, .03, 0.5, I didn‘t get nervous and kept riding better and better. I feel very proud of my riding and my race and also the work of the team, because we put together the electronics and the setting of the bike in a very good way.”Starting from pole, the reigning MotoGP Champion Lorenzo led Iannone and Repsol Honda’s Dani Pedrosa through turn one, as Marquez got stuck behind Rossi outside of the top five. Lorenzo was able to hold the first position for the opening lap, but the Ducati GP16s piloted by Iannone and teammate Dovizioso passed him easily after showing some serious top speeds on the front straight.With Lorenzo in third, Rossi and Marquez filed immediately behind, and these top fives split from the rest of the group that was led by Pedrosa and Vinales.With Iannone leading Dovi up front, Lorenzo began his smooth riding style, looking to ride within a centimeter of his line every lap. Behind, Marquez took Rossi at turn six and began chasing down his fellow Spaniard countryman Lorenzo. Dovi began putting the pressure on Iannone, who suffered a crash at turn 13 that led to a DNF. Soon after, LCR Honda’s Cal Crutchlow also crashed out, but on turn four.With Dovizioso out front alone, Lorenzo crept up and took the lead on lap nine. The two battled, and began pulling away from the grid while setting some of the fastest laps of the race.Lorenzo fought hard, and eventually began opening a gap on Dovizioso, who fell prey to Marquez. The two-time MotoGP Champion Marquez remained out front of Dovizioso for a bit, but heading into the final lap, Dovi used the power of the Desmosedici and passed Marquez at turn one.Dovizioso would remain in second, finishing 2.019 of a second behind Lorenzo, and 0.267 of a second ahead of Marquez. Rossi finished fourth, 0.1 of second behind Marquez, with Pedrosa earning fifth – but over 13 seconds behind Lorenzo.Rounding out the top 10 were Vinales, the Monster Yamaha Tech 3 duo of Pol Espargaro and Bradley Smith, respectively, Avitnia Racing Ducati’s Hector Barbera and Octo Pramac Yakhnick Ducati’s Scott Redding.Besides Iannone and Crutchlow, Avintia Racing Ducati’s Loris Baz and Aprilia Racing Team’s Stefan Bradl also crashed out; both walked away unharmed.With his win, Lornenzo now has a perfect 25 points, five ahead Dovizioso and nine ahead of Marquez. The series will break for two weeks ahead of round two of 18 at the Termas di Rio Hondo Circuit in Argentina.