The 2016 MotoGP Championship officially got underway Wednesday with the first pre-race conference of the season at Losail International Circuit in Qatar.

Many changes are on the horizon ahead of 2016 MotoGP, including the switch from Bridgestone to Michelin for the spec tires, revised fuel limits, and a new spec ECU that will require much more rider input.

Ahead of the season opener at Qatar, Lorenzo led two preseason tests at Sepang and Qatar, and Vinales the other at Phillip Island.

The reigning MotoGP Champion Lorenzo was the first to talk: “Not a lot of things change from the outside where the people can see the bikes. For the riders, it’s really a big difference. Firstly with the tires, the Michelins offer a completely different feeling on the bike and also with the new electronics, the same for everyone, are less sophisticated and much more difficult to ride and control, especially with the throttle. Anyway the pre-season has been very very good, better than we expected. In the three tests we did, we got a good feeling and did some impressive lap times.”

The three-time champion then discussed how the races may start on the new tires: “In the last five or six years you could start very very fast from the first corner of the first lap, now it’s a little more complicated as we have to understand the limit in the first few laps. It’s also important the race pace, the physical condition as it looks like it will be a little more demanding in that area.”

Rossi was next to talk during the Qatar MotoGP press conference. The nine-time World Champion missed out on a 10th title last year by a mere five points. He dominated the Qatar round last season, and only missed the podium in three races. Now he’s ready for 2016.

“This year everything will be very interesting as we have a lot of differences, especially about riding the motorcycle. We changed things that make a big difference, the tires are different and also the electronic system is a little more basic. During the winter season we saw a lot of riders who were very close in their performance, looks like more than last year. It means that to arrive at the front you have to work very well during the weekend and arrive strong on Sunday,” Rossi says.

MotoGP reports that during the Phillip Island Test former 500cc front-runner Luca Cadalora appeared alongside Rossi, working with him as another set of eyes on the track: “He will work with me through the season. We worked together and tried some things in the test. It’s always interesting to have a former rider like Luca with a lot of experience and a good vision around the track. During the test we found something interesting so we’ll continue together.” 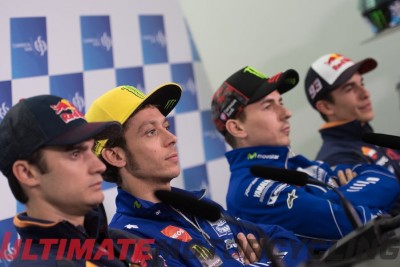 As for two-time MotoGP Champion Marquez, the young Spaniard is looking forward to improvements aboard the RC213V, which was a bit too aggressive throughout 2015: “This year has not been an easy pre-season looking at the results. But we improved and we kept a constant pace, a progressive line towards the most important and it looks like here in the last test in Qatar we did a huge step and we were closer. Anyway, we know we struggle on this track because it’s one of the worst tracks for us but the motivation and ambition of the first race can always supply what you need.”

Speaking of the Qatar preseason test, Marquez says “On the test it was amazing how close the times were. I know that in this first race the times will be really close because we did a test here so everybody already has a good pace and a good setup and it will be nice this first race. Then when we go to Argentina and to Austin we will see more the difference where we are. But we must start well this season.”

Pedrosa suffered from arm pump issues during last year’s season opener at Qatar, but is healthy for 2016: “The pre-season went quite OK physically and we did quite a lot of training and we’re quite prepared for this reason. For the technical part we’re a little more in trouble compared to last year but we’re closing the gap and I think we’re improving. Now it’s race weekend, this is quite different to testing and you focus a lot more on going fast and less on checking things on the bike. I’m more motivated in the GPs than in the test.”

Last year, Ducati’s Iannone earned his first MotoGP podium at Qatar, and went on to have a positive season. He is also looking forward to the start at Qatar, which caters to Ducati machinery: “For sure we’re really strong, but I think everyone else, Dani, Jorge, Maverick, Valentino, every rider in MotoGP is really strong. But for sure we want to improve and we want to go better than 2015 and for sure I think and I want to win my first MotoGP class race. For sure this is my objective and I try my best at this track and from this race onwards.”

Much like Pedrosa, Iannone suffered from a lingering issue throughout the 2015 season. He had been expected to undergo surgery on his shoulder during the off-season, but opted to focus on physiotherapy: “The injuries now are an old story for me. I’m really happy with the shoulder, during the winter I worked a lot with my personal trainer and I’m working in a really good way and really happy.”

Vinales was the final rider to speak; he has surprised many on the GSX-RR, which has vastly improved since last season.

“For sure it was an incredible step for us. It was really important the experience we got last year, this year we could work better and with more concentration and calm. This was the biggest difference from last year. The bike improved, the engine improved and we got the seamless. Also about the electronics, they make everything more similar and for us and that’s better and then about the tires, I think we have a good feeling. I feel really good and I think I can be so strong with these tires. Anyway, it was a test, now it’s a race weekend and we feel motivated, calm and hungry to start the race.”

Vinales will be seeking podiums aboard the refined GSX-RR: “For sure I dream to fight with them at the top with the top riders in this world. I need to be realistic and to think if my bike is on the level to go on the podium, or if I am on the level! We showed in the test we are competitive but still we need a little more.”

0
Owners of late-model RM-Z motocrossers will rejoice the news of the all-new Suzuki MX-Tuner 2.0 tuning system for their motorcycles. The new system features...
Read more
News

0
Owners of late-model RM-Z motocrossers will rejoice the news of the all-new Suzuki MX-Tuner 2.0 tuning system for their motorcycles. The new system features...
Read more