Ahead of the 2014 Isle of Man TT, Michael Dunlop switched to BMW S1000RR machinery. That season, he dominated the 2014 TT, earning both the RST Superbike and Senior TT races.Dunlop – the nephew of the late Joey Dunlop who holds the record for 26 TT wins – would tally up 11 TT victories that year. Luck would be much different at the 2015 TT. Though the Ballymoney native set his fastest TT lap of 132.515 mph – the second fastest TT lap in history behind John McGuinness’ record 132.701 set in 2015 – he sustained an injury during the opening RST Superbike race. This damped his progress a bit, but he still earned a podium at the Royal London 360 Superstock race.Read 2015 Isle of Man TT Results & RecapFast forward to 2016, and the Leicestershire-based Hawk Racing has confirmed Dunlop will compete at the 2016 Isle of Man TT. Once again, the 26-year-old Dunlop will ride BMW S1000RR machinery during the 2016 IOM TT, and will also compete at the North West 200, the Ulster Grand Prix, and several British Superbike rounds, including Silverstone and Outon Park where he will ride as a wild card entry. 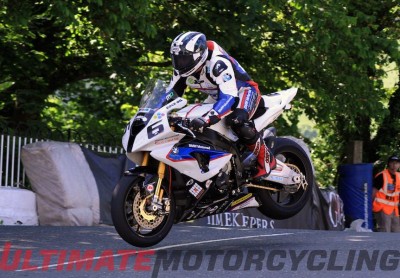 Dunlop’s Isle of Man TT journey began in 2007 with his first race win in the Supersport class two years later. He took his first “big bike” victory in 2011, winning the Superstock race before taking his first Superbike title in 2013.“I’m coming back to win again,” Dunlop says. “I gave it my best last year but the Superbike crash wasn’t the best preparation for the Senior. My last lap at the TT reminded everyone what I can do and with these boys behind me I’m ready to race properly again.”Hawk Racing Team Manager Steve Hicken also comments: “We’re delighted to have Michael back on board for 2016. We know what we have to do to get him back on the top step on the Isle of Man and with a proper lead time to prepare this year we’re looking forward to helping Michael achieve his ambitions.”