In a few days the Yamalube Yamaha Rally Team will begin the 2016 Dakar Rally with the all-new 2016 Yamaha WR450F Rally, a bike specifically designed for the brutal conditions of the world’s most demanding rally-raid.

Preparing for a race that will last 15 days and cover nearly 6,000 miles is without a doubt a challenge. The Yamalube Yamah Rally Team have undergone an intense season of extensive bike development and testing to ensure their success – not to mention their strenuous physical training regimen in preparation for the legendary Dakar Rally.

The 2016 Yamaha WR450F Rally process strong and linear torque, offering outstanding performance in conjunction with an extremely high level or handling. Specifically designed for rally conditions, the bike utilizes a front fuel injection system which guarantees the best level of engine performance possible. Of course, for endurance racing, weight is critical and became one of the main considerations for the Dakar Rally.

“The priority was given on optimizing the overall set up of the motorcycle”, explains Team Manager José Leloir. “The lighter the motorcycle is, the faster it goes, then the easier the riders can ride and the least they get tired.”

With its slim profile, the 2016 WR450F Rally makes all the difference for in terms of feeling during the ride, allowing greater maneuverability when aboard the WR450F. Improved aerodynamics have also come into play, allowing the team to edge that much more against the competition. 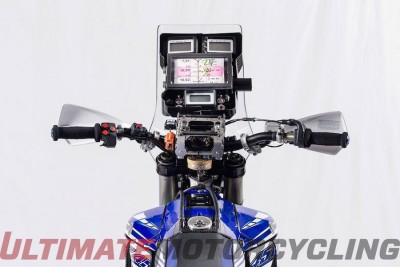 Hélder Rodrigues rejoins the Yamalube Yamaha Official Rally Team with positivity in both his colleagues and the bike, confident they will be able to take things to the next level.

“I am happy to take the start of my tenth Dakar back with Yamaha. We already made great results together in 2012 and 2013 and I am confident for 2016 with the new WR450F Rally”, says the Portuguese rider.

“With my teammate Alessandro Botturi and Yamaha’s mechanics, we have been discussing, testing, riding and reviewing all the aspects of the motorcycle, in readiness for the Dakar. I had very good feelings on this WR450F Rally during the season and I feel 100per cent confident for the Dakar.”

The 2016 Yamalube Yamaha Official Rally Team riders Rodrigues and Botturi have already tested the limits of the 2016 Yamaha WR450F and arrived to the top spot of the podium. They finished respectively first and second in the Rally of Tunisia and second and third in the TransAnatolia Rally Raid (Turkey); Rodrigues classified third in the Rally of Sardinia (Italy) and Alessandro Botturi first in the Merzouga Rally (Morroco). To say the least – Both the team and bike are ready for Dakar.

On Jan. 2, 2016, in Buenos Aires, the riders set their boots down on the starting grid of the 2016 Dakar Rally. For additional information, visit Dakar Rally.