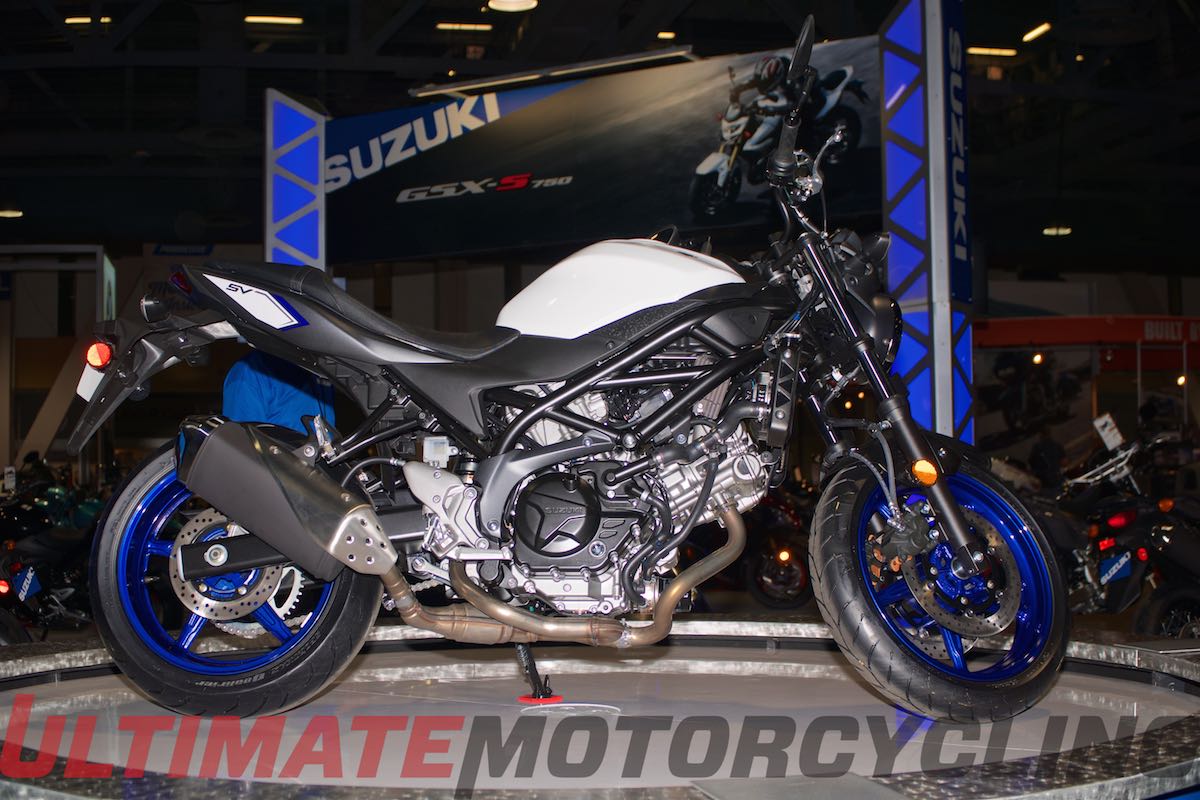 If you’re heading to the Long Beach edition of the Progressive International Motorcycle Shows, here are 20 must-see machines (with a few other recommendations thrown in there). There are plenty of other motorcycles, ATVs, UTVs, scooter, customs, and accessories to check out, so if there’s an IMS anywhere near you, make sure to swing on in.

This bike is returning to its roots, but you will have to wait for it a bit–it’s a 2017 model (which earns it top billing–a 2017 in 2015!). Lighter than ever with more power, this promises to be the best SV650 yet. Just sitting there on the spinning carousel, it looks like a lot of fun. We don’t know where Roland Sands gets the time to build as many amazing bikes as he does, but we’re glad he finds it. The BMW Concept 101 debuted at the Villa d’Este Concours d’Elegance in Italy, but it looked right at home at the Progressive International Motorcycle Show in Long Beach. We hope this concept hits the production line. BMW also showed off a custom R nineT, plus the new G 310 R naked upright. There will probably be a long line to get a chance to take a seat on this beautiful machine. While you’re waiting, watch the video of the Africa Twin in action off-road. There’s lot of air in those jumps, and plenty of challenging terrain. Because it is designated as the 2016 Honda CRF1000L Africa Twin, we’re expecting CRF-style performance. We’ll be testing it in December in South Africa. The price in America? How about $12,999! The new 2016 Ducati Superbike 959 Panigale is sweet. We’ll have a test of the monocoque-framed wonder quite soon, but we’re already dreaming of how the new Superquadro 955cc, 157-horsepower motor going to perform on the track. Also worth seeing is the new Ducati Multistrada 1200 Enduro knobby-tired adventure bike and updated XDiavel cruiser. If you don’t need 100 horsepower to enjoy a cruiser, the downsized motor of the 2016 Indian Scout Sixty will be exactly what you’re looking for. Riders who prefer less chrome will be attracted to the Scout Sixty, which still puts out a healthy 78 horses for your galloping pleasure. The bike that Jonathan Rea breezed to a World Superbike Championship this year is back with many improvements. The 2016 Kawasaki Ninja ZX-10R has a new chassis, suspension, and brakes, all designed to retain the WSBK title. What? You say the standard Super Duke R 1290 isn’t enough for you? Well, wait until you get a load of the Special Edition version. Loaded with KTM PowerParts and a titanium Akrapovič muffler, along with a new shade of KTM orange and plenty of carbon fiber, the 2017 KTM Super Duke R 1290 Special Edition gets the adrenaline flowing, even before you start it up. However, you’ll have to wait until Fall 2016 to get one in the US. Based on the much-loved FZ-09, the XSR900 brings a classic Yamaha XS styling to a fully modern motorcycle. The 60th anniversary livery on the 2016 Yamaha XSR900 is very cool, so you can enjoy retro appearance with contemporary performance. Looking very much like a direct competitor to the new Nortons, the 2016 Triumph Thruxton R has a powerful new 1200cc twin cylinder motor. The R doesn’t just have café-styling. It also has the performance accoutrements, such as radially mounted Brembo brake calipers in the front, plus Öhlins suspension. With 62-percent more torque than last years Thruxton 850, this bike is going to do the Ace Cafe proud. Be sure to check out its brother, the Bonneville T120. As if the Monster 1200 S wasn’t enough, now there’s and incredible R version to drool over. There’s 160 horsepower lurking in that 1198cc Testastretta 11° motor, plus Öhlins suspension, a new larger rear disc brake, a new 200/55 ZR17 Pirelli Diablo Supercorsa SP tire and a trellis frame that attaches to the cylinder head. The 2016 Ducati Monster 1200 R looks ready to rage in the street–we’ll take red over this black, however. Ducati also showed off the new Hypermotard 939 SP, Hyperstrada 939, and Scrambler Sixty2–we can’t wait. With adventure touring taking over from sport touring, the 2016 Honda VFR1200X is a big attention getter at the IMS. With a big V-4 motor, it’s not for any sort of serious off-roading, but you should be able to get totally real on pavement. Decked out with Honda Genuine Accessories bags, just looking at it had us dreaming of destinations for rides.

Samco V-1 Warbird. Made in America, and using Buell powerplants (watch for a switch to S&S soon), the 2016 Samco V-1 Warbird is a striking handmade machine. As many parts as possible are made in the United States, and Samco bills it as a “Truly American Made Motorcycle.” That’s good, but we can’t wait to take this trellis-framed wonder into the canyons. Watch for a review of this very special bike soon. A greatly under-appreciated machine, the 690 Duke has some engine refinements this year. There’s a new cylinder head to go along with a new lighter, stronger piston and connecting rod, plus a second counterbalancer. Apparently, the 2016 KTM 690 Duke’s powerband is now 1000 rpm wider and peaks at 73 horsepower. That may not sound like a lot, but the 690 Duke only weighs about 350 pounds gassed up. We like the orange version.14. Suzuki Bandit 1250S ABS The Bandit drifts in and out of the Suzuki lineup and we’re glad to see it back. It’s a jack-of-all-trades motorcycle that sticks with the basics and the 2016 Suzuki Bandit 1250S ABS has warded off the many technological advances that many riders want to avoid. The Bonneville line grows up a bit with a new 900cc liquid-cooled motor with the best styling yet. The impressive 59 ft/lbs of torque peak comes on at just 3200 rpm, so we can’t wait to ride the 2016 Triumph Street Twin…and we will be soonhttps://ultimatemotorcycling.com/2015/10/28/2016-triumph-street-twin-bonneville-meets-modernity/ in Spain. In the meantime, we’re enjoying just looking at this beautiful machine. The off-road version of the V-Strom 650 platform has the distinctive beak of the V-Strom 1000, and for this year it has been stripped down for lighter weight. All sorts of accessories are available for the 2016 V-Strom 650XT to make it as rugged for adventure riding and touring as you like. We enjoyed checking out the new less-is-more appearance. This one is a great unknown and we spent quite a bit of time checking it out. Priced at just $3495, the 2016 CSC RX3 Cyclone is a Chinese-made 250cc adventure bike. It has niceties such as fuel injection, electric start, engine guards, water-cooling and a six-speed transmission, side bags and a top case, and the built quality looks good. CSC tells us the bike has done Baja and the 10,000 kilometer Brest-Dushanbe Rally through the western Asia, so we look forward to testing one. Like everyone else, we wonder how bad/good can it be for that price! We’ve seen photos of this mid-size sportbike, but they don’t do justice to it in person. The redesigned 2016 Honda CBR500R may be labeled a beginner bike (though we think the CB300F is a better choice), but it’s really just a capable inexpensive sport bike. It looks very cool, and we look forward to testing one on the streets of LA and in the canyons of the Santa Monica Mountains. A cult classic with over 100,000 of these maxi scooters on the road, the 2016 Burgman 650 ABS Executive is ready for touring with heated grips, a backrest for the passenger, and heated seating for the driver and passenger. Motorcyclists may turn their noses up at scooters, but the Burgman 650 ABS Executive is quite an accomplished two-wheeler. Grab a ride on one if you ever have the chance. Okay, so it has a couple of extra wheels…this thing is a monster. Using a liter-sized triple as a power plant, and featuring a truckload of accessories from the Yamaha accessories catalog, the 2016 Yamaha YZX1000R looks like a ton of fun. Be sure to check out the suspension!Photography by Don Williams