Victory Motorcycles and Brammo Engineering need your help. The Polaris-owned companies have put out an alert regarding a stolen motorcycle – the Victory Electric Prototype raced by Lee Johnston in this year’s Isle of Man TT Zero.The Victory Isle of Man TT bike was stolen while on display at Brammo Headquarters in Talent, Oregon. The Electric Prototype, which earned third in the Zero TT by Lee Johnston, was stolen Thursday evening; no time was reported, though police are reviewing security footage. 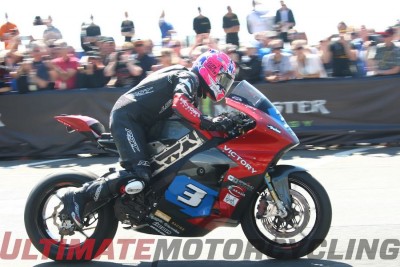 Victory says the Isle of Man TT Electric prototype was on display with its complete race bodywork (as shown in attached images). Johnston’s Racer #3 was on this particular machine. However the body may have been removed or over-painted to mask its origin, Victory reports.The Frame VIN is stamped #004 and there is a $1000 reward for information leading to the recovery of this historically significant motorcycle. Individuals with information or who feel they may have seen the Victory Isle of Man TT bike should contact the investigating officer: Bill May, Case# 15-2149, at the Talent OR Police Department at 541-535-1253.Victory says “The teams from Victory and Brammo are gutted that thieves made off with this important piece of motorcycling history, and appreciate the diligence and assistance of motorcycle enthusiasts across the country. We request in particular that those in the Pacific North West be on the lookout. We will update both the Brammo Facebook and Victory Motorcycles Facebook pages as new information becomes available.”For more, visit Victory to Race Isle of Man TT Zero.