Guy Martin is the Valentino Rossi of the Isle of Man TT. The 33-year-old Brit – who has one of the thickest accents in motorsports – has never won a TT, but became a crowd favorite shortly after his first Isle of Man TT appearance in 2004.A mechanic by trade, the long side-burned racer also has legions of fans in America. And the respect Martin has garnered from stateside fans will surely grow. Why? He will be at the controls of Victory’s electric prototype during Wednesday’s SES Zero TT.Martin, who rides for Tyco BMW in the superbike TT classes, took his first-ever TT lap on an electric motorcycle during Monday practice for the Zero TT. Martin wasn’t originally slated to pilot the 175-horsepower Victory Racing electric bike; Martin’s teammate William Dunlop (Tyco BMW S1000RR0 was signed for the task, but the nephew of the late Joey Dunlop, who holds the record of 26 TT wins, was injured during Monday’s TT practice.During the wreck at Laurel Bank on the 37.73-mile Mountain Course, Dunlop suffered a broken rib and some bruising. This forced him out of action for the 2015 TT. Martin then consulted with his Tyco BMW team and Victory, and became Dunlop’s last-minute substitute.During his first-ever ride on an electric bike, Martin posted an impressive 104.56mph average lap, and achieved 147.8 mph through the Sulby speed trap. William Dunlop says he was targeting 150mph at Sulby, and now that the team has some data from Martin’s run, these speeds may be possible. 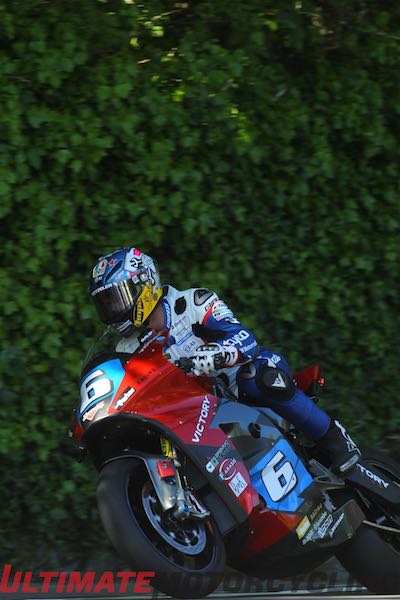 “I couldn’t be more impressed,” Martin said of the Victory electric prototype powered by a Parker GVM electric engine – the same used by Brammo, which was acquired by Victory’s parent company, Polaris Industries. “It was mega. So quiet and really fast. A mega experience.”Though Martin was quick, Lee “General Lee” Johnston was even quicker on the other Victory Racing electric prototype. Johnston hit 157.9 mph through the Sulby speed trap, though he ran out of power after his hot lap.“I caught up with Guy at Sulby and got a good slipstream then passed him,” he said. “I was starting to slow coming down from the Creg, then Guy came past.”Brian Wismann, Victory Racing Team Manager, said: “The team were gutted to hear of William’s crash during practice this morning, but are relieved to learn that he’s OK and will make a full recovery. We had a talk with William and he pegged Guy as the best rider to fill in for him on the Victory Racing electric prototype, so we moved quickly to get Guy confirmed for the bike.“We sent Lee and Guy out for today’s session with the power turned up a bit from the first session, and the riders made good use of it! Unfortunately, we overshot our mark a bit and both riders slowed in the final mile to cross the line.“Luckily, we’ve been given another qualifying session tomorrow so we can take another shot at getting the perfect balance between power and energy consumption.”Victory reports that the practice highlights how performance in the Zero TT is down to the amount of electrical energy that can be stored onboard. Parker’s US-based strategic account manager, Kevin Holloway, sums it up succinctly: “Energy storage is the Holy Grail for electric vehicles.”After Lee achieved 157.9mph today on the bike, Victory Racing and Parker Racing have more details about the design of the electric motor that propelled him to that speed, Victory reports.

The motor is made by Parker and called the Parker GVM. It’s cylindrical and sits behind the swingarm’s pivot point. The Parker GVM is just eight inches (0.2m) in diameter and five inches (0.13m) long, but generates 175 horsepower, giving around 165 horsepower at the rear wheel.It is 97 percent efficient; nearly all of the electrical energy drawn from the Brammo batteries is converted in to kinetic energy to drive the chain and sprocket on the rear wheel.Parker has designed an internal water-cooling system for the GVM motor. It resides within the motor, rather than creating a jacket around it; this way the smaller volume achieved means that the motor has a much higher power density.