Victory Motorcycles will make Isle of Man TT history this year by entering two electric prototypes in the 2015 SES TT Zero. This is Victory Racing’s second-major announcement; last week, Victory reported that it will field a prototype built by Roland Sands in the Pikes Peak International Hill Climb.

Piloting the electric machines for Victory Racing’s debut race on European soil are two TT standards – William Dunlop, the nephew of the late Joey Dunlop who holds the record for most TT wins (26), and Lee Johnston, known as “General Lee.”

The news arrives after Victory Motorcycles parent company – Polaris Industries – acquired in January electric-motorcycle manufacturer Brammo. Though not stating that the bikes are based on Brammo machinery, both Victory e-bike prototypes will feature Parker GVM PMAC electric engines – the same ones that power the Brammo Empulse R. They also look very similar to the Empulse models.

“The entire Victory team is excited to make history with this effort,” said Rod Krois, Victory General Manager. “We know that William Dunlop’s experience and the continued Victory Motorcycles development of this electric race bike through work with Parker will propel us into a strong future with electric motorcycles.”

During the 2015 SES TT Zero, Northern Ireland’s Dunlop – a four-time TT podium finisher – and Johnston – the 2013 TT Privateer Trophy Winner – will complete a single lap around the 37.73 Snaefell Mountain Course on Wednesday, June 10. 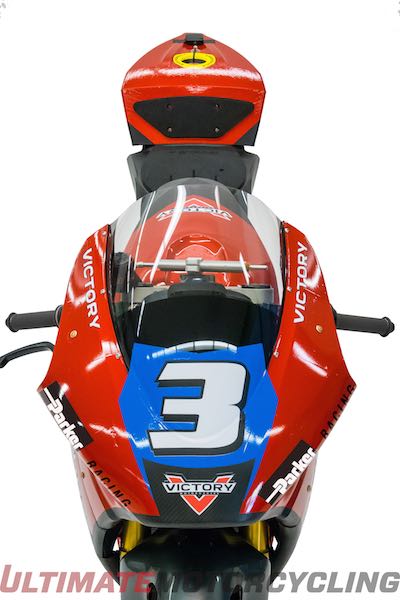 “I’m more than excited to race this prototype at the Isle of Man,” Dunlop says. “Electric powertrains have many advantages, and the Isle of Man is one of the greatest tests in motorcycle racing.”

Ben Furnish, Marketing Manager for Parker Hannifin said, “Parker is thrilled to be involved with Victory Motorcycles in this historic event with these talented riders. We look forward to working with Victory to develop high performance powertrains for electric motorcycles.”

Victory Motorcycles will host a continuous news feed of updates and photos from the Isle of Man TT and will have more information available on the Victory electric prototype race bike at www.VictoryMotorcycles.com. Be sure to follow Victory on Twitter @VictoryBikes and on Facebook at facebook.com/VictoryMotorcycles for additional updates. To learn more about Parker and their production version of the GVM traction motors visit http://www.parker.com/hev.