Home Motorcycle Racing News MotoGP 2015 Austin MotoGP Results from Circuit of the Americas
Facebook
Twitter
Linkedin
Pinterest
Email
Print
WhatsApp
ReddIt
Welcome to Circuit of the Americas just outside Austin, Texas – a 3.426-mile circuit with a demanding 20-turn layout that challenges the MotoGP grid with its blind turns and radical elevation changes. How radical? The ascent to turn one is 133 feet – roughly have the size of COTA’s gorgeous observation tower.Besides these challenges, rain threatened the 21-lap race at the circuit that hosted MotoGP since 2013. Due to some wet spots on the track under the bridge above the esses near turn 3, the race was delayed for nearly 40 minutes.But luckily for the 25-rider grid – and the fans – the sun was out and the entire race was held under dry conditions. This proved lucky for the man who dominated in Austin since the track’s inception in Grand Prix racing – Repsol Honda’s Marc Marquez.The 22-year-old Spaniard won both races from the pole, and held a perfect record at COTA. And this wasn’t about to change in 2015. Marquez again earned the pole for 2015 Austin MotoGP, and under hot and greasy track conditions, took his first win of 2015 ahead of Ducati Team’s Andrea Dovizioso and Movistar Yamaha MotoGP’s Valentino Rossi.Starting from his 23rd pole of his MotoGP career, Marquez got to the hairpin turn one second behind Qatar’s pole sitter, Dovizioso. Following behind were Qatar’s winner, Rossi, Monster Yamaha Tech 3’s Bradley Smith and two-time MotoGP Champion Jorge Lorenzo on the Movistar Yamaha MotoGP.Marc VDS Honda’s Scott Redding went in too deep at the hairpin turn 11 before the nearly three-quarter of a mile straight where speeds over 212 mph are reached, and tucked the front. He also took out Monster Tech 3 Yamagha’s Pol Espargaro, and slowed down the rest of the grid.Up front, Dovi began pulling away, and led the first lap in Austin. As for the sole American in MotoGP, Aspar Racing Honda’s Nicky Hayden was in 18th. The next to crash was Avinitia Racing’s Stefan Bradl at turn 12.Marquez made his way into the lead ahead of turn 12 at the back of the straight with 17 to go, showing how late he can brake on the RC213V. From there, Marquez did what he does best at COTA, and began opening a gap. Marquez seemed to perfect his line more and more as the race continued, and rode with complete precision – making 64 degrees of lean angle look like child’s play. He led the remaining 17 laps for his first win of 2015 MotoGP, and his third-straight at COTA. Combined with Indianapolis Motor Speedway, Marquez has now won the last six races held in the USA.As Marquez opened a gap, Rossi began attacking Dovizioso. The nine-time World Champion got past Dovi at turn 20, but Dovi’s GP15 quickly countered. At this time, Pramac Ducati’s Yonny Hernandez crashed heading onto the front straight, just tucking the front.Rossi continued to stalk, and took second off Dovi in the esses with 14 to go. Dovi wouldn’t give up, and the prototypes touched.Behind, Dovizioso’s teammate Andrea Iannone moved up into fourth, passing Lorenzo and then Smith. By mid race, it became a race to conserve tires, COTA’s hot and humid track conditions placing a beating on the Bridgestone rubber.With 11 to go, Lorenzo took fifth of Smith, and began chasing the Ducati duo of Andreas; these GP15 pilots finished on the podium at Qatar, earning Ducati its first double podium since 2010.Marquez had opened up a nearly four-second lead on Rossi with seven laps remaining, showing he is continually rewriting MotoGP history as he chases his third-straight title.Behind, though, Dovi wasn’t finished. He made a slick pass on Rossi heading into turn three, sandwiching Rossi between him and teammate Iannone. Dovi’s speed on the back straight was impressing, but Rossi had a slight advantage on the brakes – something expected of a 36-year-old rider with more experience than anyone else on the grid.With five laps remaining, Marquez had over a four-second gap as AB Motoracing Honda’s Karel Abraham pulled into the pits with technical issues. Two laps later, Lorenzo made a pass on Iannone in the esses to take over fourth. He began chasing down Rossi, but there wasn’t enough time.Marquez would take the win 2.354 seconds ahead of Dovizioso, with Rossi finishing third, 3.120 seconds behind. Lorenzo finished fourth, 6.682 seconds back, followed by Iannone.Rounding out the top 10 were Smith, CWM LCR Honda’s Cal Crutchlow, Team Suzuki ECSTAR’s Aleix Espargaro, Team Suzuki ECSTAR’s Maverick Vinales and Pramac Racing Ducati’s Danilo Petrucci.As for Hayden, he finished his 200th premier-class start in 13th, behind Avintia Racing Ducati’s Hector Barbera and Dani Pedrosa’s substitute on the Repsol Honda RC213V, Hiroshi Aoyama.After two of 18 rounds, Rossi continues to lead the series with 41 points, one ahead of Dovizioso. Marquez is now in third with 36 points, and Iannone is in fourth with 27.MotoGP now heads directly to Argentina for round three at the Termas de rio Hondo circuit.Photos by Ara Ashjian2015 Austin MotoGP Photo Gallery: 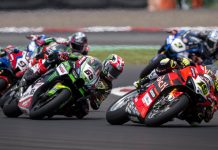