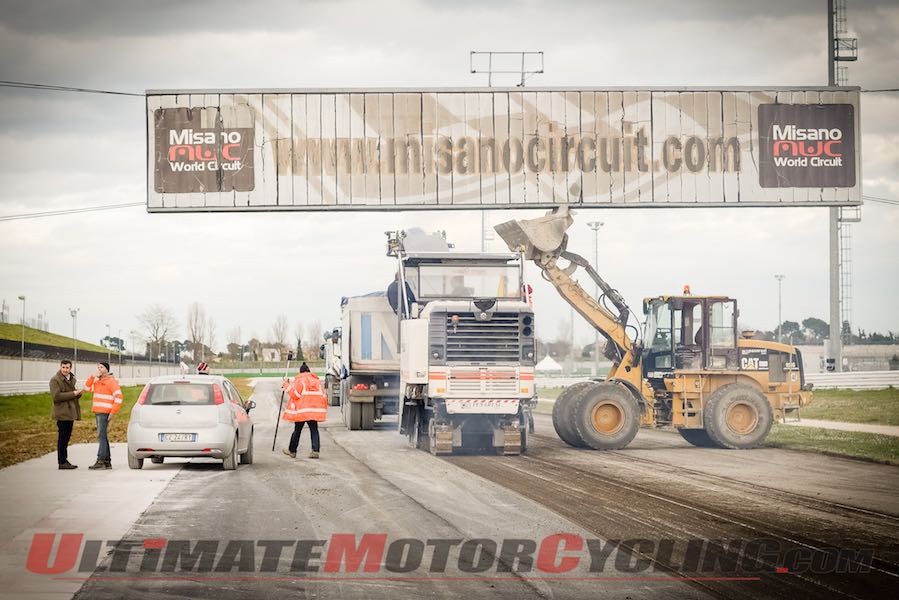 The iconic Misano World Circuit in San Marino is undergoing a facelift. The 2.6-mile “Marco Simoncelli Misano,” which will host this summer MotoGP and World Superbike, will be completely resurfaced by March 10 (weather permitting).The resurfacing plans were entrusted to Jarno Zaffelli of Dromo Circuit Design, the Italian firm which has led resurfacing/redesigning of other iconic circuits including Mugello, Imola and Termas de Rio Hondo.Besides the new asphalt, a few design tweaks will allow two new shorter track configurations (1.98 and 0.6 mile), though MotoGP and World Superbike will run on the traditional long course. The resurfacing will also provide additional safety, representatives of Misano report. Taking on construction responsibilities is Pesaresi Spa Company of Rimini, Italy.Speaking of the resurfacing, Jarno Zaffelli of Dromo Circuit Design says: “Misano will be the best of its form. Not only will be faster, but all interventions, calculated with our certified softwares based on DroCAS, are the footprint of the overall improvement in safety, active and passive.“All the operations will be done in about 14 days with 80 operators, 50 vehicles and 3D positioning systems based on the finding laser DTS to stretch more than 5,000 tons of asphalt special. The most important operation will be the balance of all the escape routes for car and motorcycle, the formulation of a specific asphalt to counterfight the effects of salt and moisture, the reprofiling of curves and curbs and also the construction of two new connections, the Brutapela and Acquedotto’s turn.“A total of 35 points of intervention and the total reconstruction of the main track’s asphalt that once again demonstrates our expertise in supporting racetracks around the world for both cars and motorcycles ”When researching the resurfacing project, Misano representatives made sure international sports federations were involved, such as the FIM, which oversees MotoGP and World Superbike.Speaking of the repaving, the FIM’s Franco Uncini, who is in charge for safety at MotoGP circuits, says “Misano World Circuit has accepted the MotoGP request for improving the safety systems. The property of the circuit has always agreed to the FIM and FIA requests, clear sign that management of MWC is always careful to ensure a track and a plant to the highest level of safety and performance.“Increasing safety allows to increase the performance and consequently to increase the public’s interest in Misano which is always present in large amounts. Also this year we expect to see the ‘sold out’! ”Misano Resurfacing Stats: