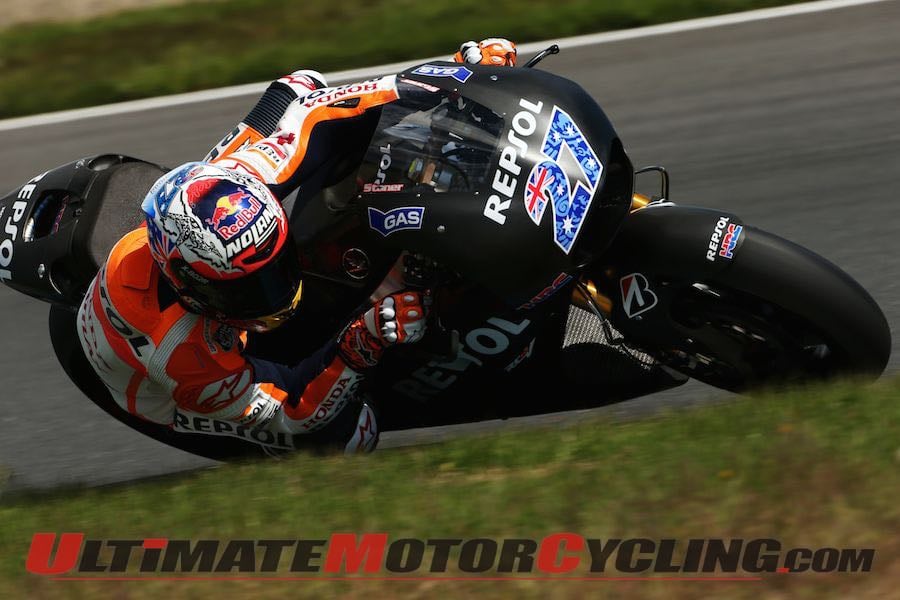 Under MotoGP regulations, contracted riders are unable to complete any testing during the winter test ban that runs from December 1 through January 31.But teams are still able to test for developmental purposes throughout the winter ban with their test riders. And one team took advantage the Sepang International Circuit this week for some off-season testing – Repsol Honda.HRC was at the Malaysian circuit from Thursday through Saturday with two-time MotoGP Champion Casey Stoner (2007, Ducati; 2011, Honda), the official Team HRC test rider. Though the test was interrupted by rain, HRC was able to fulfill its entire testing plans.During the three-day test, Stoner evaluated the 2014 and 2015 RC213V prototypes used by Repsol Honda riders Marc Marquez and Dani Pedrosa. The Australian compared the chassis, analyzed “new spec” equipment and tested new Brembo brakes.This testing will help the team quickly get up to speed during the first official MotoGP preseason test February 4-7 at Sepang.Team HRC engineers also had Stoner complete a few laps on the Honda CBR1000RR that will be used in this year’s Suzuka 8 Hour race (FIM Endurance World Championship).Speaking of the test, Casey Stoner said “Overall it’s been a good test, very positive and we got a lot done! On the first day we worked on the base setup and tested some small things before the rain arrived and we had to stop.“Then on day two I spent a lot of time doing a back-to-back chassis comparison from last year’s bike to this year’s and I also tested different variations of the chassis. Brembo brought some new aluminum calipers for us to try and Honda had several other test items which we managed to get through before the rain came once again.“On the final day we confirmed some feelings from yesterday and tried a few electronic packages as well as some different suspension. Riding the CBR was very different, I’ve never really ridden that kind of bike, the shifting, riding position, engine power, weight characteristic etc was quite difficult and took some getting used to.“After a few exits I had more of an understanding and was able to give some feedback. In general it was a lot of fun and I enjoyed being able to feel the rear of the bike step out!”