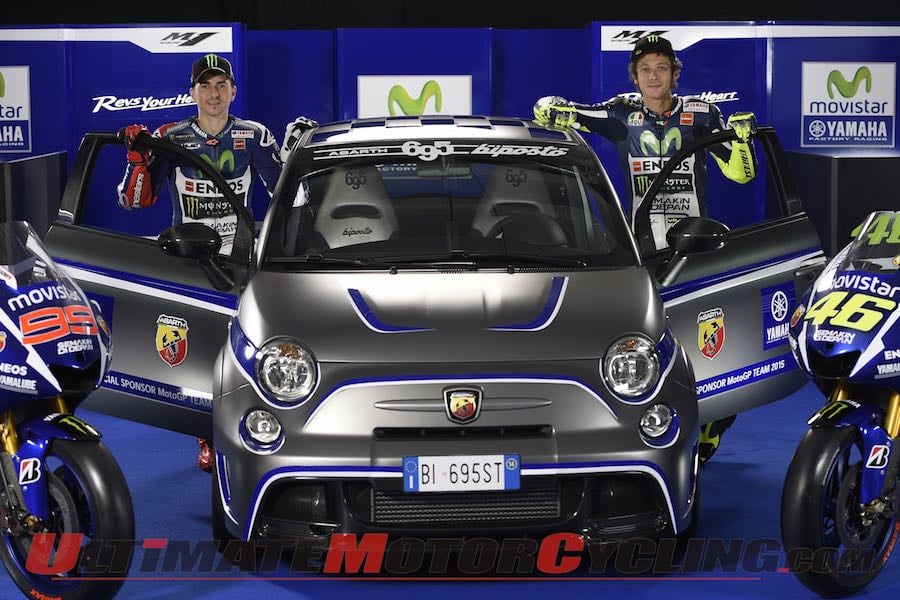 The Italian car company Abarth has signed a two-year deal as official sponsor of the Movistar Yamaha MotoGP team. Besides being official sponsor, Abarth will also supply cars during the race and tests throughout the 2015 MotoGP Championship.The Abarth Scorpion log will now be visible on the Yamaha YZR-M1 prototype cowlings of both Jorge Lorenzo and Valentino Rossi.Yamaha is no stranger to Abarth; the company sponsored the Yamaha team of Valentino Rossi and Colin Edwards during the 2007 Australian Grand Prix. Abarth has a long history and credible pedigree in racing with Carlo Abarth achieving sporting success on two wheels as far back as 1928.Lin Jarvis, Managing Director, Yamaha Motor Racing. says “I’m really very happy to see the Scorpion logo back on our YZR-M1. It is always a pleasure to welcome back old friends to the team so we are delighted that Abarth joins us for this new adventure. We have been together with the Fiat Group, now FCA Group, since 2007 so we have had a long and successful partnership that continues to grow in strength. We are confident that the 2015 and 2016 seasons will make exciting new chapters in our story together. The very sporting nature of the Abarth brand couldn’t be a better match for the team, representing the same values we hold true.”Marco Magnanini, Head of Abarth Brand, EMEA region, says “The partnership between Abarth and Yamaha results from a number of shared values. Innovation, passion for performances and love for racing: this is where the joint journey between two companies that wrote the history of two- and four-wheels racing takes off from.”About Abarth:Performance for all. An idea born in 1949 through the vision of Carlo Abarth, who imbues his cars with the strong, determined and indomitable character of his zodiac sign, Scorpio, which first became a logo, and then an unmistakable sign of cars with unique dimensions, form, speed and attitude.Small, agile cars with mean little engines. Unique lines and forms which originate from distinctively Italian taste and stylistic choices. Performance which stems not only from power but from the capacity to tune and set up in order to get the very best from every machine. An icon which has defiance in its DNA. A lifestyle which feeds and grows every day on the passion of all Abarth fans.Abarth’s work began again in 2007. Research, experimentation and the desire to create unique models allow us to look forward with enthusiasm, ready to accept new challenges and achieve new victories.To discover more about ABARTH, please visit www.abarth.com.