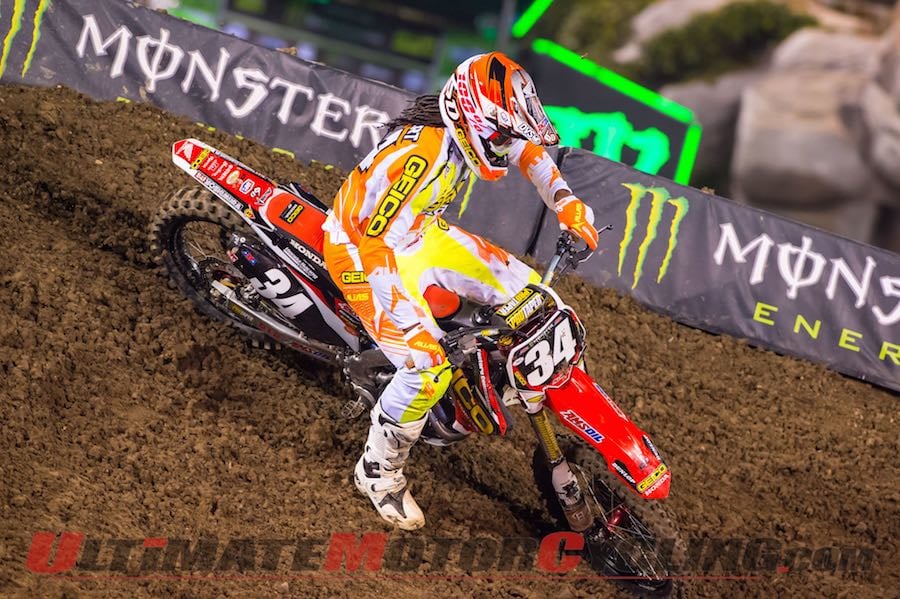 GEICO Honda’s Malcolm Stewart NewsWinning once only makes true racers want to win again, and GEICO Honda rider Malcolm Stewart is no exception.Fresh off his first career 250cc victory in Monster Energy Supercross competition, Stewart has his sights set on continuing his success in this weekend’s race at Angel Stadium of Anaheim, and that starts with confidence in himself and his team’s confidence in him.“Just believe – that’s it,” Stewart said. “You’re always going to have ups and downs in racing, and Oakland [Calif.] was my time to get on the box.”Stewart joined the team for 2015, and after a hiccup in the first race of the year Stewart has shown plenty of speed. He scored a podium finish in Phoenix, followed by a fifth-place finish in the second Anaheim race.Now, he hopes to keep the momentum rolling in Anaheim 3.“I felt good on practice all day long, and it paid off,” Stewart said. “Now, let’s just keep building from here. Whether I win, get second, get third, let’s get it on the box. It always looks good when the GEICO Honda gets on the box.”Stewart’s recent run of success has helped him leap 16 places in the standings to sixth, 22 points behind leader Cooper Webb with five West Series races remaining.The Oakland victory was big for Stewart for many reasons, including having his father and mother present, but his emotions were also tempered because older brother James wasn’t there to celebrate with him.“Even though I got this win, it doesn’t feel the same as when I have my brother here,” Stewart said. “I miss him so much, and it’s emotional not having him here.”Family is important to Stewart, and he’s appreciative of his GEICO Honda family for supporting him this season.“(Team owner) Jeff Majkrzak and the entire team has had my back this year,” Stewart said. “That means a lot, and I’m glad I can earn their support. I hope we can continue to have success the rest of the year.”