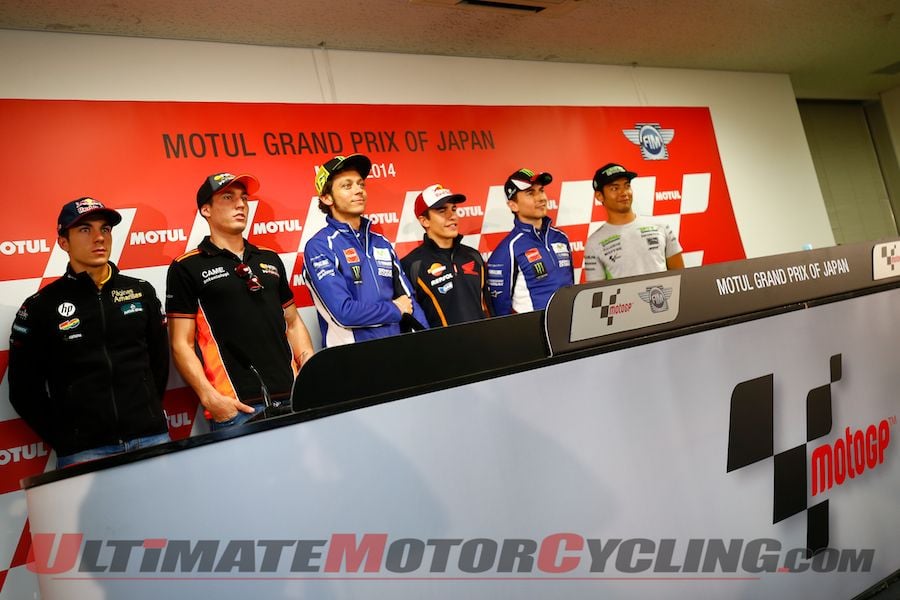 2014 Motegi MotoGP Press ConferenceRound 15 of the 2014 MotoGP Championship officially got underway Thursday with the traditional pre-race conference at the Twin Ring Motegi circuit.The round marks the first of three-consecutive weeks of racing, a stretch that will truly test the condition of the riders.In attendance were the reigning MotoGP Champion and points leader Marc Marquez, Valentino Rossi, Jorge Lorenzo, Aleix Espargaro, Maverick Vinales of Moto2 and home rider Hiroshi Aoyama.Repsol Honda’s Marquez highlighted the conference – he could clinch the title this weekend at the Grand Prix of Japan. He currently has a 75-point lead over his teammate Dani Pedrosa, and if he wins – or finishes second or third ahead of Pedrosa and Rossi – he can secure the title.“When you look back at the Aragon race on TV it looks like I was stupid to stay out on slicks, but when I was on track I was thinking there are only three laps to go. But the tires cooled down and I crashed. It’s all about experience,” Marquez says.“This weekend is the first chance to win the championship and I’m happy because there are still four races to go so that’s good for me. We will try to approach it like a normal race and push to be in the first positions. It is nice to have the chance at the home round for Honda, but I’m not nervous because my target is to win the championship and it doesn’t matter when.”The Movistar Yamaha MotoGP pilot Rossi trails Marquez by 78 points. He suffered a ferocious crash at Aragon two weeks ago that knocked him out. The nine-time World Champion suffered no injuries, and is ready to battle for a possible eight title in the premier class.“It was a bad crash but I was already ok on the Monday after the race at Aragon, so I’m fine. In the past I have had good races in Motegi and I won the championship here in 2008,” Rossi says.“Last year I expected more here, but I made a mistake after a good start and I couldn’t stay with the top three. So we have to improve this year. This is an important part of the season and everyone is at their maximum.”Rossi’s teammate Lorenzo won his first race of 2014 at Aragon. The two-time MotoGP Champion also won at Motegi last season, and also in 2009.“For quite a while now we have been in good shape, with good results. In the second half of the season I have more points than anyone else so far. Aragon was fantastic because I expected to be behind the Honda guys, but finally we won the race,” Lorenzo says.“Now I’m getting close to the second place in the championship. It is impossible to catch Marc now but my target is to finish in the top two places in every race.”NGM Forward Racing’s Espargaro earned his first premier-class podium at a wet Aragon with second. He joins the returning Team Suzuki MotoGP team next season.“The last weeks have been amongst the best in my life, especially with the race at Aragon,” Espargaro says.“Finishing in second place behind Jorge was like a dream. It is really exciting with this new project with Suzuki. It is not going to be easy because we have to do a lot of work with the bike, but I feel like I’m at the best moment in my career.”Home rider Aoyama has luck at Motegi, the Drive M7 Aspar rider finishing on the podium there four times across all classes.“I have been on the podium four times here so it’s a good track for me. Last year I finished 17th but this year I have a new bike and a new team and I know I can enjoy it. All my friends and family will be here.”Paginas Amarillas HP 40’s Vinales was also present at the conference. The reigning Moto3 Champion and Moto2 title contender will be the other rider on the Suzuki MotoGP Team.“I’m really happy, I had the best weekend of my life at Aragon. I won the race and then the announcement was made that I will move into MotoGP with Suzuki. I’m really proud to be involved with the project,” Vinales says.Also on the eve of the Motul Grand Prix of Japan, Aoyama and Viñales were joined by Hector Barbera, Johann Zarco, Takaaki Nakagami, Hafizh Syahrin, Romano Fenati and Danny Kent as they enjoyed the longest zipline in Japan, in the beautiful forests surrounding Motegi. At 561 meters in length the double zipline put the riders’ fear of heights and their courage to the test at 38 meters from the ground, MotoGP reports.The riders will be on the Twin Ring Motegi Circuit Friday for the first free practice. For a preview, visit 2014 Motegi MotoGP Preview.