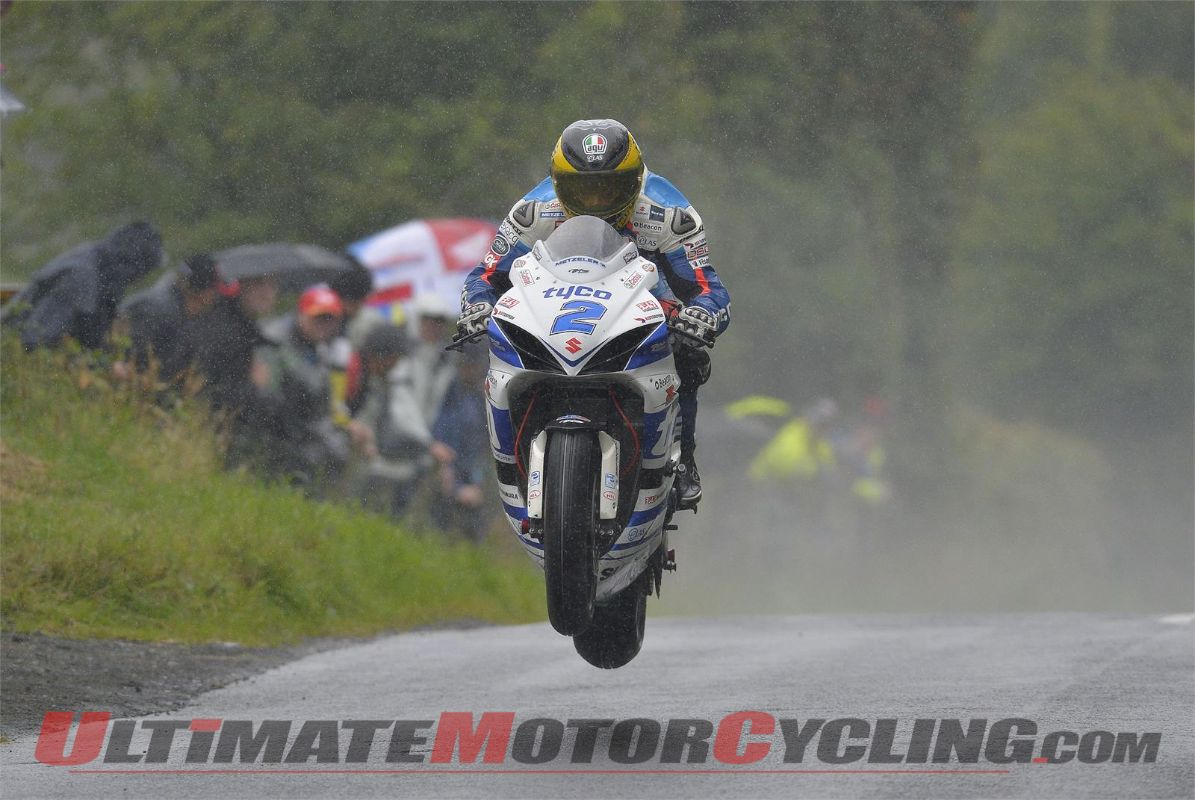 2014 Ireland Amory Road RacesLast week, Northern Ireland hosted the Armoy Road Races, which provide great practice for international road racers ahead of the Ulster Grand Prix (Aug. 16).And taking two out of three wins on a rainy Saturday, July 26, was Isle of Man TT favorite Guy Martin. The Tyco Suzuki GSX-R pilot and his team of locals from Moneymore took the Moyle D.C Supersport and SGS International Superbike Open races.The Lincolnshire-based Martin then took second in the RiverRidge Recycling Race of Legends, finishing behind 11-time Isle of Man TT winner Michael Dunlop.The Southern 100 Solo Champion, who also collected the “Man of the Meeting” award, said “We’ve never had a win at Armoy, so I’m happy to come away with two wins and the ‘Man of the Meeting’ award. The bikes are mega in the wet or dry, but in that last race I’d a couple of moments and the second one was big enough to let me know to back-off a little bit.“But yeah… it’s a mega little meeting: we’ve had a couple of wins to back-up the Southern 100 win and it’s a good run-out before the Ulster Grand Prix. Hopefully we can go there and do something similar to last year. It’s a race for the boat home now, but thanks to the TAS boys for another mega weekend of racing.”Team Manager Philip Neill said: “It was great to be able to support the Armoy event once again this year, as we are always made very welcome by the organizers; and it has become an event we really enjoy participating in.“In terms of results: a one-two in both Supersport races in firstly dry, then wet conditions was especially pleasing and really is testament to how strong a package the Yoshimura powered GSX-R600 has become.“Guy’s first win in the Superbike class at Armoy was another milestone in our partnership with him, and although Michael had a little bit more than us in the final race of the day – we leave Armoy very happy with our performances. Thanks to both William (Dunlop, Tyco Suzuki) and Guy for their efforts on track and of course my team, who always give 100 percent behind the scenes.”Moyle D.C Supersport Results: 1 Guy Martin (Tyco Suzuki); 2 William Dunlop (Tyco Suzuki) +6.600sec; 3 Keith Amor +10.783sec; 4 Derek McGhee +11.018sec; 5 Michael Dunlop +13.455sec; 6 Derek Sheils +30.657sec.SGS International Superbike Open: 1 Guy Martin (Tyco Suzuki); 2 Michael Dunlop +0.820sec; 3 William Dunlop (Tyco Suzuki) +8.718sec; 4 Dan Kneen +10.088sec; 5 *Keith Amor +12.452; 6 *Derek McGhee +15.755sec. (*600cc machines)RiverRidge Recycling Race of Legends: 1 Michael Dunlop; 2 Guy Martin (Tyco Suzuki) +3.228sec; 3 Dan Kneen +6.131sec; 4 William Dunlop (Tyco Suzuki) +6.385sec; 5 Seamus Elliott +24.314sec; 6 Derek Sheils