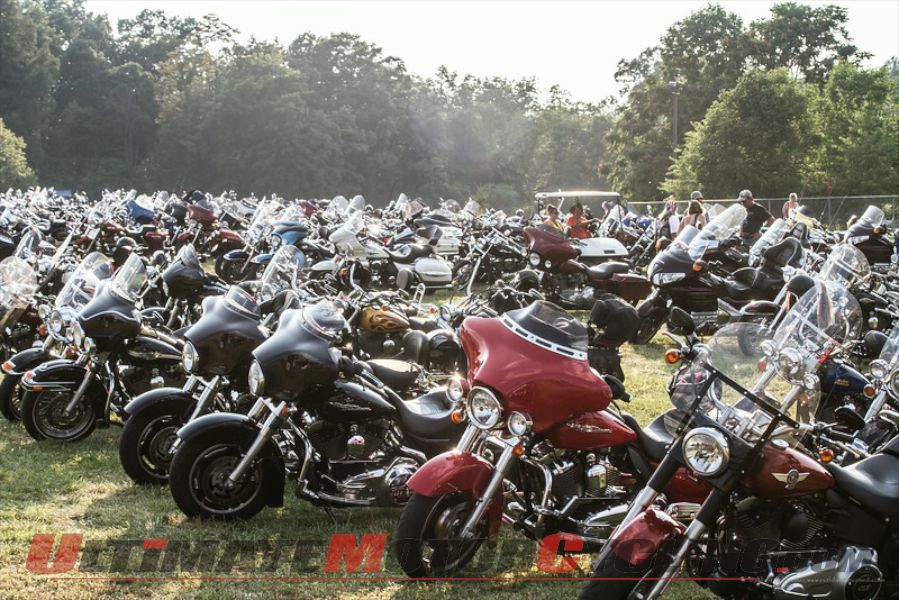 2014 Gettysburg Bike WeekGettysburg Bike Week, celebrated their 13 year with a record crowd and more events than ever. The week started out on Wednesday night with the kick off party at the Dobbin House Tavern and Bill O’Brien from 98.5 and live music from Schitzophonic.The official start to Gettysburg Bike Week was Thursday morning when the first bikes went out for the Poker Run. Tom Keefer of Franklin Church Choppers and Greg Carter of Vicious Cycles started their live bike build off and shortly after, knowing that by Saturday evening they had to have a bike ready to ride up on stage.In the late afternoon Jack Schit took to the stage for the first time during the week and helped Gettysburg Bike Week attendees “make memories”. He presided over the opening ceremonies and welcomed the first of many regional bands to the stage that day including Robbing Noll, Whiskey Demon, Silvertung and the headliners of the night TESLA. TESLA was a crowd favorite and rocked for almost two hours, giving the crowd a show that will not be forgotten.Friday featured a tattoo contest with dozens of men and women baring all their ink from the stage. The Flaunt Girls took to the stage for the first time showing off their acrobatic, sexy performance for all of Gettysburg Bike Week to see.Shane Speal and his Snake Oil Band wowed everyone with his improvisational instruments and rootsy blues cigar box guitar style. Hot leathers presented the Grammy winning Kentucky Headhunters with their Southern Rock Style that took the crowd by storm. The night was capped off by AC/DC tribute band Big Jack with crowd favorite 7 year old drummer Avery Molek sitting in on several songs.Saturday was a huge day starting with the Cycle Source Ride in Bike Show with a Pan/Shovel taking best of show and winning a feature in Cycle Source Magazine. The bike show was followed by traditional biker games and the prerequisite burnout contest.Another tattoo contest was held at the main stage with a whole new crop of men and women showing up to show off their ink. The Parade of Chrome was a spectacle to behold with hundreds of bikes making the trip and arriving in style at the Gettysburg Bike Week main event site.The bikini contest showed off the talent of local ladies with Mercedes winning top honors and $300. The Biker Buildoff builders took to the mainstage and the winner was announced, Vicious Cycles. Saturday night was topped off by a great performance by Grate Train Robbery, fireworks that rivaled the 4th of July and an additional set by Great Train Robbery.Gettysburg Bike Week 2015 is scheduled for July 9-12th back at the Allstar Event Complex.About Gettysburg Bike Week
Gettysburg Bike Week is Eastern Pennsylvania’s definitive rally with great national music acts, historic riding and hospitality that you can only find in a city with this much history.For more information on the Rally, including schedule, lodging options, and more, visit www.gettysburgbikeweek.com. To contact Gettysburg Bike Week email gbwvendor@yahoo.com