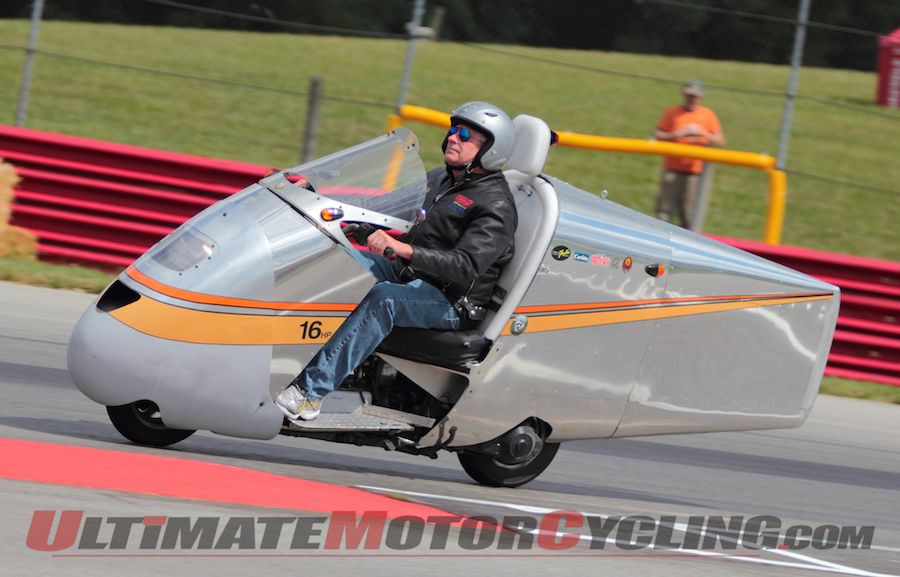 Craig Vetter Fuel Economy ChallengeOn Friday, July 11, a dedicated group of motorcyclists will challenge each other to get more from less as they compete for high-mileage honors at the Craig Vetter Fuel Economy Challenge during BikeBandit.com AMA Vintage Motorcycle Days, featuring Indian Motorcycle, at Mid-Ohio Sports Car Course in Lexington, Ohio.AMA Motorcycle Hall of Famer Craig Vetter, who himself will compete in the challenge, invites all riders to join the competition.“On Friday morning, the most exotic motorcycles on the road will compete to see who can consume the least energy while travelling the way we really ride,” Vetter said. “Gasoline, diesel and electric-powered machines will ride together at posted speeds in a 77-mile round trip. The winner will be the one that consumes the least fuel as measured in dollars. Last year, Fred Hayes won by getting 162 mpg on his diesel-powered bike, which translates to 2.3¢ per mile.”Vetter said that the 2014 competition is anyone’s to win.“It’s looking very close,” he said. “This is exciting stuff. Buy your tickets to AMA Vintage Motorcycle Days and come ride with us to see what it’s all about.”Winners will be announced during Vetter’s seminar “Amazing Stories of Streamlining from the Vetter Fuel Challenges” at 11:30 a.m. on Sunday, July 13, in the AMA Motorcycle Hall of Fame auxiliary tent.The ride will begin at the Bellville, Ohio, Comfort Inn & Suites at 8:30 a.m., Friday morning, and head to the AMA Motorcycle Hall of Fame Museum in nearby Pickerington before returning to Mansfield. A riders’ meeting will be held Thursday at 6:30 p.m. at the motel.There is no charge to participate in the Craig Vetter Fuel Economy Challenge, but riders must have tickets to AMA Vintage Motorcycle Days. Additional rules and details about the Craig Vetter Fuel Economy Challenge are available at www.craigvetter.com.With proceeds supporting the AMA Motorcycle Hall of Fame, BikeBandit.com AMA Vintage Motorcycle Days, featuring Indian Motorcycle, is the country’s premier celebration of vintage motorcycles and motorcycling heritage.For 2014, the event is shining the spotlight on the famed Indian Wrecking Crew, which in the early 1950s made an indelible mark on the history books and solidified the reputation of Indian Motocycles, as the company was then known, as one of the 20th Century’s greatest marques. Bobby Hill and Bill Tuman, the surviving members of the Indian Wrecking Crew, which also included the late Ernie Beckman, will serve as grand marshals of BikeBandit.com AMA Vintage Motorcycle Days, featuring Indian Motorcycle.Join thousands of other vintage motorcycling fans this July 11-13 as history comes alive in central Ohio at the country’s premier vintage motorcycling event. Enjoy national championship vintage road racing, motocross, harescrambles, trials and dirt track competition, as well as bikes shows, demo rides of new motorcycles and North America’s largest motorcycle swap meet.For more on BikeBandit.com AMA Vintage Motorcycle Days, featuring Indian Motorcycle, see www.amavintagemotorcycledays.com.