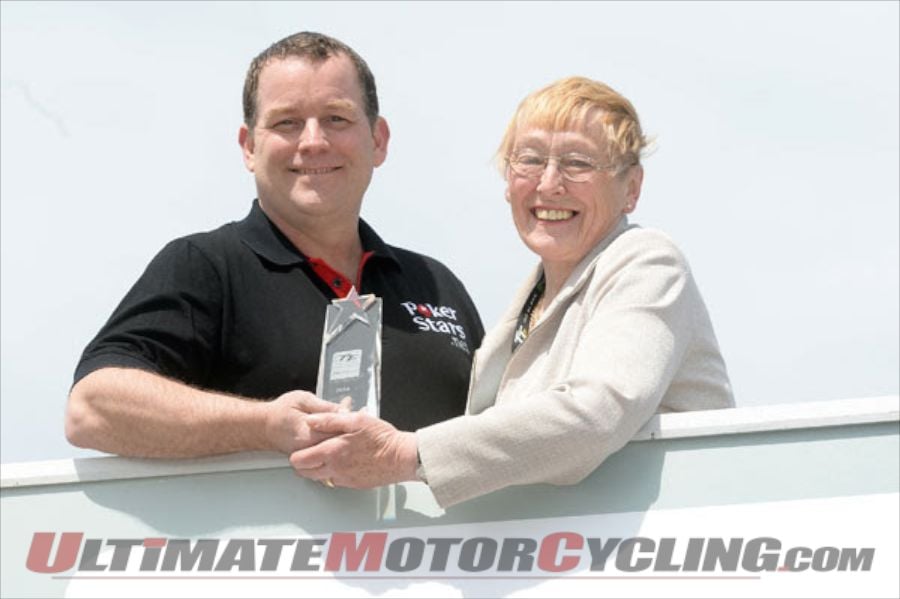 2014 Isle of Man PokerStars Spirit of the TT AwardFrances Thorp, the Honorary Secretary of the TT Riders Association for the past eleven years, has been awarded this year’s PokerStars Spirit of the TT Award. The position is unpaid and subject to an election every year.Ex-racer Freddie Frith formed the charity, which provides funds for old and injured riders and their families, in 1953. All current and former TT riders are eligible to join. Frances’ husband Tom, who passed away in 2012, competed at the TT and MGP from 1956 to 1962 and was a TTRA member.The charity is made up of an Honorary Secretary and Treasurer, four committeemen and a President with a new president elected each year. Current president is Mortons Media Publisher Malcolm Wheeler while previous presidents have included Phillip McCallen, Mike Hailwood MBE, John Surtees MBE, Joey Dunlop, Stanley Woods and Geoff Duke OBE.The TTRA operates a number of fundraising events in the UK and worldwide through the year including their high profile annual lunch at the NEC in Birmingham during Motorcycle Live. The charity has helped hundreds of riders and their families past and present over its sixty-year history but never reveals individual details. Frances is regularly seen operating and managing the “38th milestone,” the meeting point behind the grandstand for ex-riders during the TT Races and Isle of Man Festival of Motorcycling.David Cretney, Isle of Man Government Political Member with responsibility for Tourism and Motorsport says “Frances is a worthy recipient of this year’s award. The incredible work that she puts in to fundraise for the TT Riders Association is second to none and many riders past and present have benefited from her efforts.”Representatives from the Isle of Man Government’s Motorsport team including David Cretney, the Isle of Man Government representative with responsibility for Motorsport and Tourism, TT rider liaison officers Richard Quayle and John Barton, ACU Clerk of the Course Gary Thompson and PokerStars Head of Corporate Communications Eric Hollreiser judged the award. Nominations were invited from members of the public and from officials associated with the TT.The award is given to the person or team who best represent the ethos and values of the TT Races including decency, honesty, generosity, courage, compassion, integrity, respect, teamwork and commitment to the development of the races.Previous winners of the award have included Paul Owen in 2010, Conor Cummins in 2011 and sidecar duo Ben and Tom Birchall who won the award in 2012. Longest serving TT Marshal Eric Alexander, 81, who first marshaled at the TT in 1952, won the 2013 award.PokerStars Director of Corporate Communications Eric Hollreiser says, “The TT Riders Association is a tremendous charity that does incredible work behind the scenes and is a hugely important and relevant part of the overall TT organization. We are delighted to be able to recognize both their efforts and Frances’ work with this award.”