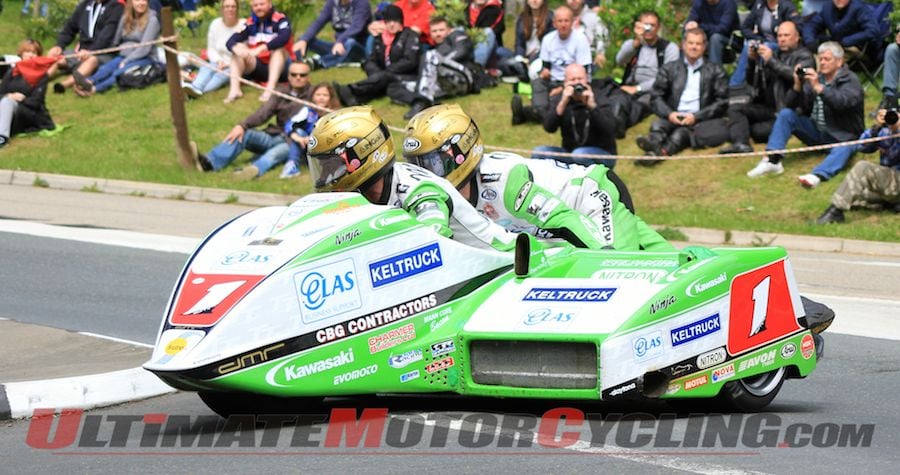 2014 Isle of Man TT Sure Sidecar 2 ResultsDave Molyneux/Patrick Farrance won the second Sure Sidecar TT race on Thursday afternoon, the Manxman claiming his 17th victory, after John Holden/Andy Winkle ran into problems at mid-race distance.Molyneux/Farrance found themselves almost 18 seconds behind at Ramsey on the second lap but then Holden started to experience problems and they eventually slipped back to third with Sure Sidecar Race 1 winners Conrad Harrison/Mike Aylott taking second, the result seeing them claim the overall RAC TT Championship.After a two-hour delay, the field were finally set off on the Mountain Course at 2.15pm with warnings about damp patches at Ballaspur, the 13th Milestone, Ramsey Hairpin to the Waterworks, and the Nook through to Governor’s Bridge.Holden/Winkle had taken an early lead through Glen Helen on the opening lap with Harrison/Aylott two seconds behind and Molyneux/Farrance a further 4.7s in arrears in third. Tim Reeves/Gregory Cluze hopes of challenging for the win already seemed over as they were almost ten seconds behind the flying Holden/Winkle.By Ramsey, Holden/Winkle had extended their lead and the Lancastrian pairing were pressing home their advantage all round the first lap, breaking the timing beam at 113.253mph as they flashed through the Grandstand on the opening lap. Their lead stood at a healthy 13.6s although Molyneux/Farrance were now in second some 2.2s clear of Harrison/Aylott. Reeves/Cluze were holding their place in fourth with Ian and Carl Bell going well in fifth ahead of the local pairing of Karl Bennett/Lee Cain.On the second lap, Holden/Winkle continued their pursuit of glory and they took more time out of Molyneux/Farrance who continued to lead on the roads. The gap had increased to 16.2s at Glen Helen with a further 1.2s on the run to Ramsey. 16-times winner Molyneux though was increasing his advantage over third placed Harrison/Aylott with the English duo doing likewise to Reeves/Cluze.However, at the end of the lap, Holden/Winkle’s LCR Honda saw their lead significantly reduced and Molyneux/Farrance had brought it down to 11.6s with just one lap of the Mountain Course remaining. The top four places remained the same but Bennett/Cain were up to fifth as the Bells pulled in to the pits to retire at the end of lap two.By Glen Helen on the final lap, it was clear all was not well with Holden/Winkle as their lead was just 2.6s and with the engine not sounding at all like it should, it was no surprise when the next timing point at Ballaugh saw Molyneux/Farrance in front for the first time, their lead of over 17 seconds clear indication that Holden/Winkle were in trouble.Molyneux’s lead had rocketed up to 38 seconds by they time he swept through Ramsey Haiprin for the final time and with Holden’s engine misfiring, he’d slipped back to third as Harrison/Aylott moved up to second. Reeves/Cluze were also coming under pressure from Bennett/Cain, the gap between the duo just 2.2s with just the ascent and descent of Snaefell remaining.Molyneux/Farrance now had the race win in the bag, save for a mechanical issue, but there were no such problems and they took a fine win, the 17th for Moly and the third for Farrance, by 43.9s from Harrison/Aylott with the latter duo securing the overall win.Holden/Winkle hung on to third but only just as Reeves/Cluze closed to within six seconds with a charging Bennett/Cain, in turn only nine seconds behind in fifth.The newcomer pairing of Alan Founds/Tom Founds again excelled and were rewarded with a brilliant sixth place while Greg Lambert/Kenny Cole, Wayne Lockey/Mark Sayers, John Saunders/Robert Lunt and Rob Handcock/Basil Bevan completed the top ten.There were also strong performances from more of the newcomers with the Australians Dwight and Noel Beare in a superb 12th and the Lowther brothers, John and Jake, in 17th.Photos by Wayne Freestone