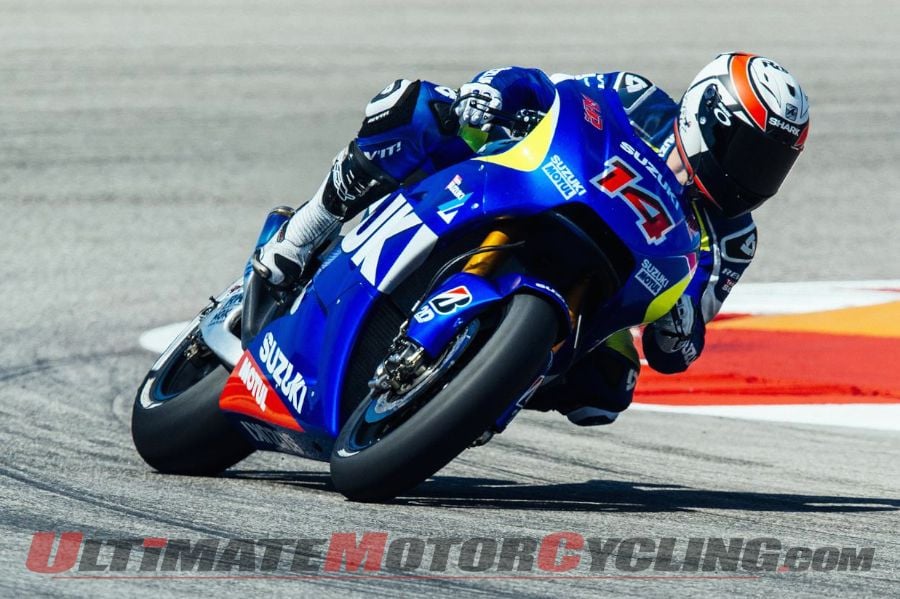 Suzuki MotoGP Testing NewsThe Suzuki MotoGP Test Team wrapped up its testing sessions Thursday at Austin’s Circuit of the Americas.Track temperatures remained cooler than they were at Sunday’s MotoGP, but test riders Randy de Puniet and Nobuatsu Aoki were able to get much work completed on the Suzuki prototype as the team prepares for its return to 2015 MotoGP.The team was joined on the 3,426-mile circuit congaing 20 corners by 1993 MotoGP Champion Kevin Schwantz and the Yoshimura Suzuki AMA Superbike team, along with a few journalists having some fun on GSX-R 1000 machinery.When the test wrapped up, lead tester De Puniet completed 62 laps with a best lap time of 2:05.85, which was just over a half-second quicker than his best Wednesday time.When the test concluded, the team was happy with the overall improvements made on the Suzuki prototype, and will use the information for a baseline during the next testing session at Argentina’s Termas de Rio Hondo at the end of the month.Randy de Puniet summed up the test: “I’m happy that we have found a big improvement on throttle connection and traction control. We worked some time to find the right setting with the new electronics also and at the end we found a good compromise. We continued to work on the chosen chassis and it worked really well today. So the package is definitely better and I wanted to have an extra day to be able to continue the work as yesterday we spent most of the time setting-up the bike for the new circuit along with the new electronics. Also, I have not been riding a bike for a few weeks and I needed to get back the feeling.“Anyway, today on the race tyre, we improved a lot from yesterday’s lap times and found a good pace. Unfortunately I wasn’t able to try some sort-of time-attack by the end of the day as we had a small problem on the bike and we lost the last half-hour on the track. But I feel we had the potential to even further improve our performance.“Now we’ll go to Argentina – which is a completely new circuit – but I’m glad we will go there soon and hopefully I will be still hot from this test.”Satoru Terada, Project Leader and Team Suzuki MotoGP Team Director, also commented: “We brought a new engine-spec and new chassis-spec here and found a good combination. We also worked on combining a good electronic setting to this new engine-spec and we are happy with the results. We also confirmed today our chassis choice.“Our performance in terms of lap-times could have been better by the end of the day, but the important point is that we leave Austin with good information about our bike and about this circuit. We also had a time to enjoy Kevin Schwantz riding our latest MotoGP bike and also sharing the circuit with Yoshimura Team, supported by Suzuki Motor of America. Now we look forward to Argentina where we will test again on Tuesday and Wednesday after the MotoGP race.”