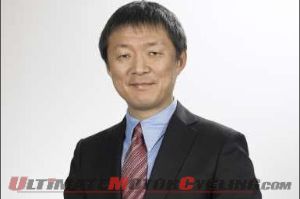 Motorcycle Industry NewsSuzuki Motor of America, Inc., (SMAI) announces the appointment of Takeshi Hayasaki as President. Hayasaki, a long-serving executive of Suzuki Motor Corporation, has many years of experience in the motorcycle/ATV industry, and began his new position December 16.The company also announced that Takao Kudo has been named Executive Vice President and will oversee the new After Sales Operations group.Takeshi Hayasaki says: “Suzuki Motor of America, Inc., is well-positioned right now for growth, with a new company focused on the recreational Powersports industry and exciting new models for 2014. I’m eager to work with Suzuki staff and dealers to continue this growth and brand momentum. We are creating opportunities for Suzuki dealers and Suzuki enthusiasts nationwide.”Hayasaki served as Assistant to the President of American Suzuki Motor Corp. from 1996 through 2002, overseeing strong growth in the company’s motorcycle/ATV division.Under Hayasaki leadership Suzuki launched several key models in the USA, such as the 1999 Hayabusa and QuadSport Z400 ATV. He gained a wide range of international experience in sales and marketing, working with Suzuki distributors in Canada, Australia, Europe and Latin America. His broad understanding of sales and marketing as well as vehicle production and distribution will allow him to serve the U.S. market well again.Larry Vandiver (Suzuki’s Motorcycle/ATV Vice President) says: “We’re glad to have Mr. Hayasaki’s business experience and leadership as we plan for continued growth.“The introduction of new products such as the Suzuki V-Strom 1000 ABS and the Burgman 200 ABS shows just part of our growth plan, and Mr. Hayasaki’s experience will help Suzuki Motor of America with these new products and much more.”Suzuki is creating a new After Sales Operations division that will help SMAI better serve consumers. This division unites parts, accessories and service functions under the leadership of Kudo, who most recently served as Export Motorcycle Service Manager, leading Suzuki Motor Corporation’s (SMC) global motorcycle service team.Kudo began working with SMC’s motorcycle service group in 1985, and has visited much of the world, including Australia, Europe, Middle East, and Africa, while working to improve Suzuki’s motorcycle, marine and automotive service efficiencies. Mr. Kudo’s global service experience will be instrumental as we launch the new After Sales Operations division.