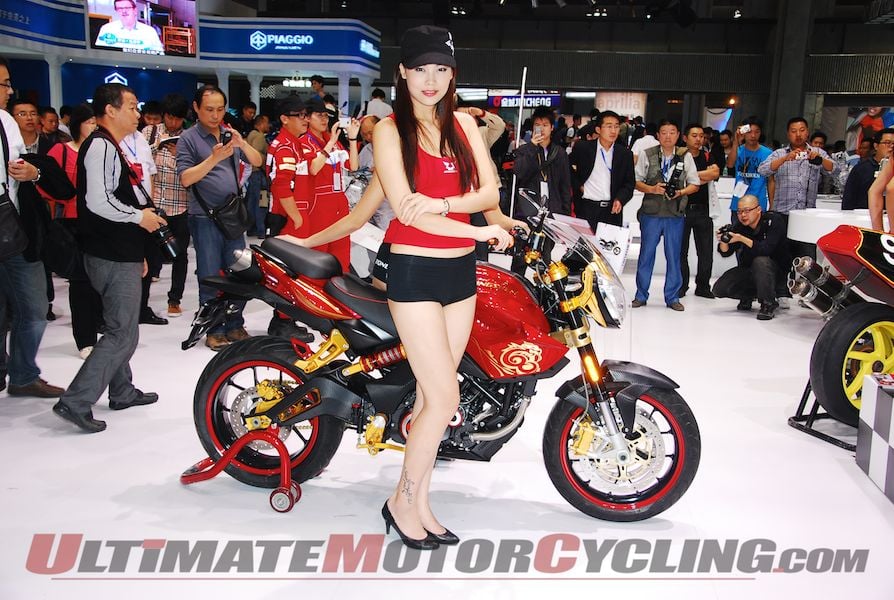 China Motorcycle NewsAs well as being the biggest producer of export motorcycles globally, China also has the biggest domestic market in the world. Despite the banning of motorcycles in many urban centers motorcycling for fun isn’t just surviving, it’s positively flourishing!I’ve been looking at the roads of Chongqing a lot more closely these days and could not have failed to notice the exponential growth in “big bikes” tearing up the tarmac.In China, “big bikes” refers to motorcycles over 600cc and any perusal of the road systems will reveal the Harley-Davidson, Ducati, Victory, MV Agusta and Japanese brands that we are so used to seeing on our own roads. If you add in to the mix the recent or imminent launches of KTM and Kawasaki you get the idea that China is turning in to a boom market for big bike manufacturers.On October 17, at the China International Motorcycle Trade Exhibition (CIMAmotor 2013) held in Chongqing, KTM held a press conference announcing that the KTM brand was officially entering the Chinese market.At the KTM booth, models such as 1190 ADVENTURE, 1190 ADVENTURE R, RC8 R, 690 DUKE, 690 DUKE R, 200 DUKE, 390 DUKE, 350 EXC-F and FREERIDE 350 (models that are among the first batch introduced to China) were all on display.“With the rapid economic development in China, China’s motorcycle market will see an increased demand for high-end and personalized products. We believe that it is a great opportunity for KTM. We are very excited and have begun to plan and build KTM’s Chinese market with a long-term view,” said Hubert TrunkenpolzMike Cai of ChinaMotor Magazine reinforces this opinion: “last year before launching their collaboration with MV Agusta, Lifan conducted a survey which showed that there are over two million people who can afford, and are interested in buying large displacement luxury motorcycles in China. This is a huge target market, and it’s encouraging Chinese manufacturers to produce their own bikes with displacements over 600cc.”There has been a very positive reaction to this phenomenon from the UK of all places! Lorne Cheetham has organized The Custom Motorcycle Show in England since he launched the event in 2010. This established event held in the summer is the only custom bike show in the UK affiliated to the AMD World Championship of Custom Bike Building, and is the first organizer of a big bike and custom show in China, namely the EPIC.With his Chinese partners Lorne has organized the expo to coincide and live within the huge bicycle trade exhibition in Shanghai New International Exhibition Centre the SNIEC on April 13-16 2013.This is Shanghai’s biggest expo centre and one of its biggest trade shows thus guaranteeing an audience of up to half a million Chinese visitors. He states “it’s the right time for China to develop such a show. We will be exhibiting motorcycles for the world’s most famous marques as well as hosting a round of the international custom competition.To give you a rough idea of out project, there will be an opportunity for the World’s leading and iconic pro-builders in the custom sector to participate at the exhibition; the opportunity to showcase their bikes, aftermarket parts and accessories will present industry professionals with the chance to conduct new business over the four days of the Shanghai event. Our intention is for EPIC to be dedicated to all Chinese custom and big bike enthusiasts, members of the expatriate communities and a broad demographic of the motorbike-loving general public.The expo also provides a superb opportunity and gateway for non-Chinese big bike manufacturers to enter this vast market. A selection of the World’s leading (pro builders) and indeed legendary independent (not for business) custom bike builders and designers will be invited to attend the show along with their customized machines! We also aim to attract around 50 World Class custom motorcycles.Some will be in and out custom bikes displayed by non business builders; some will be from pro-builders wanting to make some serious business connections. They hope to attract custom machines from the UK and Europe, California and the US, a number from Taiwan, Hong Kong, China and Japan. These World class bikes would be displayed for the general public to view over a four-day period within the expo, with their inspirational builders networking with industry specialists and bike fans alike.”As well as famous names from around the world Chinese manufacturers will be invited to show of their new and prototype projects. Currently Loncin, Jialing, CFmoto, Regal Raptor, Zongshen, Huansong, Qjiang and others have produced or are close to releasing a big bike with many others ready to enter the mix, the hope is that they also will be heavily represented at EPIC alongside the more famous international marques.This expo will also be a platform for the marketing of internationally recognised top quality accessories and looks to be a perfect platform for motorcycle companies looking to smash their way in to the Chinese market but not yet making headway (Triumph, everyone in China is looking at you)!One thing that has become obvious is the affect that the influx of international motorcycle marques is having on the Chinese manufacturers. While it’s true that China has a booming middle-class with significant disposable income, they are not the only ones who want to enjoy riding bigger displacement bikes for the sake of riding. Inspired by this many Chinese manufacturers are developing their own bigger displacement motorcycles, mainly for the domestic market but also with half an eye on export (successfully in the case of CFMoto).Chinese bigger bikes are obviously cheaper than their Japanese and European counterparts, and in many cases use technology acquired from their joint venture partners from the western world, the technology used maybe old in its parent country but it works well for a cheaper Chinese option.