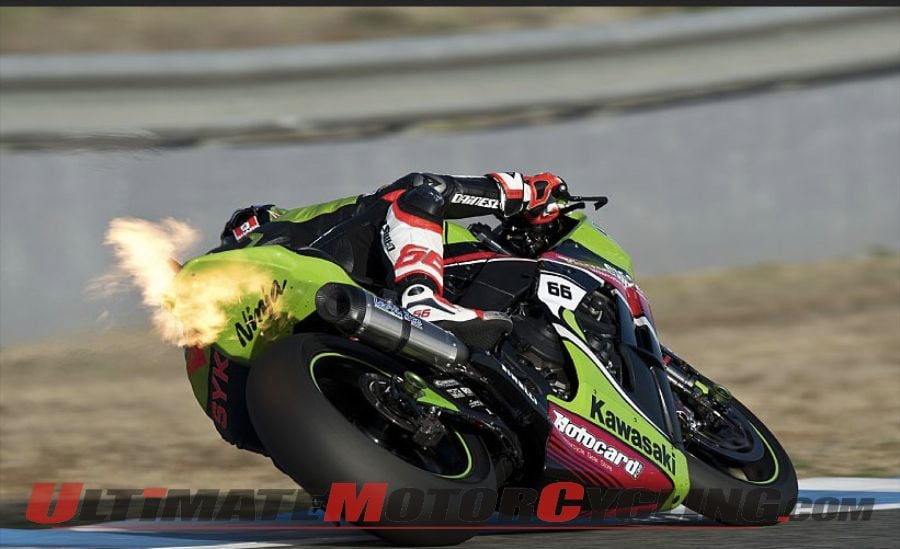 2013 World Superbike ChampionshipBack in 1993, the American Scott Russell earned the World Superbike title aboard his Muzzy Kawasaki ZX-7RR.That year, “Mr. Daytona,” Russell’s nickname after earning five Daytona 200 wins, earned 18 podiums, including five wins, four pole positions and three fastest laps.That would be Kawasaki’s last time to shine in World Superbike, which was dominated by Ducati since 1993.But this all changed in 2013 when Kawasaki Racing Team’s Tom Sykes earned his first World SBK Championship since joining the series five years ago. En route to the title, the 28-year-old ZX-10R Ninja pilot had a similar record to Russell; Sykes accomplished 18 podiums, including nine wins, eight pole positions and 13 fastest laps.Sykes took the title this past weekend at Jerez, the final round of the 15-round 2013 WSBK series. All he needed was a podium finish in the first race to clinch the title, and this is what he did; Sykes took third behind BMW Motorrad GoldBet’s Marco Melandri and race-winner Aprilia Racing Team’s Eugene Laverty.Tom Sykes (Kawasaki Racing ZX-10R Ninja Superbike) says: “Words cannot describe how I feel.  When I was dreaming I had goose bumps and it was magical to even dream I could be world champion.“But that was maybe 2 percent of what I am feeling now after winning the title. My Ninja ZX-10R was working very well. All things considered I have to be very happy today. It was good for the championship that it got decided at the final round again, especially at this beautiful circuit, with these great fans. The championship win has not fully sunk in yet but it will do soon, I’m sure.”Sykes performed well all season, but began extending his points lead at Laguna Seca in late September. Sykes won the first race following the series return to Monterrey following a 10-year absence, and finished fourth in the second race to walk away with a 23-point lead.And when the season concluded, Sykes, who lost the 2012 World SBK title a half a point to Max Biaggi (Aprilia, now retired), finished with 447 pointsSykes has now concluded the 2013 championship season with 447 points, 23 ahead of Laverty.Sykes won the 2013 World Superbike rider’s title, though Aprilia took the manufacturer’s title by 49 points. In World Supersport, however, Kawasaki Mahi Racing Team India’s rider Kenan Sofuoglu helped the ZX-6R Ninja earn the WSS manufacturer’s title by 12 points. Taking the WSS title was Sam Lowes (Yamaha).