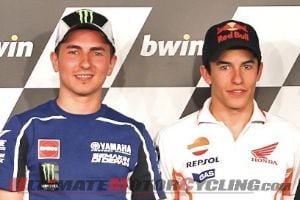 2013 Jerez MotoGP Pre-Race Press ConferenceThe traditional MotoGP pre-race press conference got underway Thursday at the Jerez Circuit ahead of the Gran Premio bwin de Espana.Present at the Spanish GP pre-race press conference were the current point leaders, Repsol honda’s Marc Marquez and Yamaha Factory Racing’s Jorge Lorenzo. The two Spaniards were joined by Monster Tech 3 Yamaha’s Cal Crutchlow, Ducati Team’s Andrea Dovizioso, LCR Honda MotoGP’s Stefan Bradl, and Marc VDS Racing’s Moto2 leader Scott Redding.For a preview of Jerez MotoGP, including full point standings, click here.Following is the official report from MotoGP:Marquez, who became the youngest ever race-winner in the premier-class last time out at Circuit of the Americas in Texas, has surprisingly never won in any class at the Jerez track.Marc Marquez (Repsol Honda RC213V MotoGP) says: “Coming back to Spain after my victory I realized it was very important [for the fans], but we mustn’t forget it’s my first season. And arriving here in Jerez is always special for everyone. But like in Qatar and Austin we’ll try our best and just focus on race set-up. Only here in Jerez I have never won, but I don’t think this weekend will be my first.”Lorenzo, who has not won at the track since 2011, will be honored this race by having the final turn named after him.Jorge Lorenzo (Yamaha Factory YZR-M1 MotoGP) says: “Today is a very special day for me. I made my debut at the Jerez track and I’ve won here a few times. For me to receive this is so special – more so than the World Championship. A few can win the Championship, but there are even less with a corner to their name. For the race, Jerez is normally a track that’s quite good for the Yamaha, as well as my riding style.”Britain’s Crutchlow could prove one of the biggest surprises this weekend, having not only topped pre-season testing at the track, but also looking very strong in the first few races.Cal Crutchlow (Monster Tech 3 Yamaha YZR-M1 MotoGP) says: “It’s nice to come back to Jerez. But I think it will be one of the most difficult races of the year, and it’s a track that is tricky for anyone to get away at the front. Obviously there is more I can do [to challenge for higher positions], but we are always taking little steps. I won’t win the race by one minute all of a sudden.”Dovizioso will lead the Ducati charge, as the Italian outfit continues to strive for improved race results.Andrea Dovizioso (Ducati Team GP13 MotoGP) says: “I’m quite happy about the results in the first two races, especially Texas. We’ll have to wait a few more races for new parts [and see an improvement in results], but [Michele] Pirro will be riding the new chassis with new engine management as a wildcard – a bike which we’ll get to try in the test on Monday.”Germany’s Bradl, fresh from fifth in Texas, aims to take the next step as the grid lines up in Jerez.Stefan Bradl (LCR Honda RC213V MotoGP) says: “In Qatar it was a mistake, as I started with a crash, though Austin was a big relief. We’ll try to finish every race as good as we can, and will try to be faster and closer to the top guys.”And in Moto2, Scott Redding will look to take his outright pace through race distance to fight for the win.Scott Redding (Marc VDS Racing Moto2) says: “The game’s just started. Texas was difficult for everyone, but we’ve come back leading the championship. I’m not changing my approach – my job is to look after myself and do the best job I can. I’ve got a pretty good set-up, also in the wet, so I’m looking forward to the race.”Earlier in the day, Lorenzo visited Jerez’s city hall where he was welcomed by mayor María José García-Pelayo. The Mallorcan rider signed the city’s book of honour and delivered a signed helmet to the mayor. This was also where it was officially announced that Lorenzo would receive the gift of having the corner named in his honour.Away from the track and city hall, some of MotoGP’s other stars, including Aleix Espargaro, Alvaro Bautista, Takaaki Nakagami, Zulfahmi Khairuddin, Alex Rins and Livio Loi, were given an insight into the Southern Spanish culture as they visited the Finca Fuente Rey, an estate that belongs to Fermin Bohórquez, a prestigious Spanish breeder of fighting bulls and a mounted bullfighter himself, along with number one bullfighter Davind Fandila “El Fandi”. “El Fandi” showed the riders how to see if a heifer is bravo, and would thus be kept to exclusively produce more bulls, as well as how to cape with a one-year old heifer.