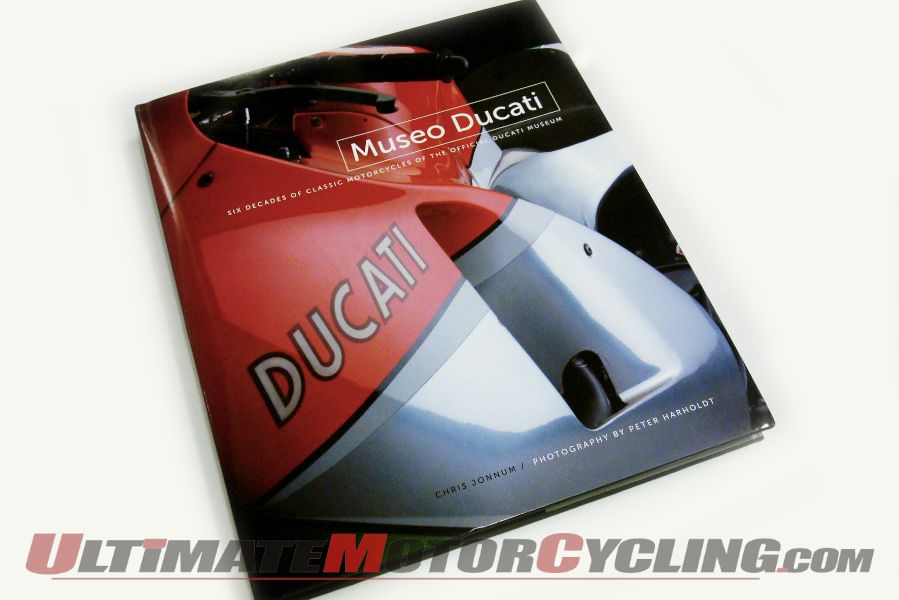 New Book Highlights Ducati’s Museum in Borgo PanigaleFor the devoted Ducatisti, the ultimate pilgrimage is the Borgo Panigale region of Bologna, the home of Ducati.Besides the main offices and factory, a main attraction is the Ducati’s official museum dedicated to its racing hertiage, Museo Ducati. Many add Museo Ducati to their bucket list, and others, like myself, secretly to their honeymoon plans. Unfortunately, though, for many this pilgrimage will never be made.But David Bull Publishing has the next best thing – the “Museo Ducati” book. The 144-page book was penned by Ducati Team Press Officer Chris Jonnum, and contains 107 museum images shot by Peter Harholdt.Museo Ducati covers more than 60 years of Ducati’s motorcycle-racing history, highlighting models such as: a Ducati Desmosedici GP10 piloted by Nicky Hayden; Doug Polen’s 888 Superbike; a 1990 851 that Raymond Roche took Ducati’s first-ever World Superbike title on; Mike Hailwood’s 1978 Isle of Man TT-winning 900 Super Sport; and a 1947 Ducati Cucciolo motorized bicycle.Speaking of book, Ducati says “Harholdt captures the essence of each one of the unique machines in stunning detail with photographs taken in a specially prepared studio at Ducati’s headquarters in Bologna, Italy. His carefully composed images reveal each model’s overall design as well as details of engines, frames, suspension and other components. Detailed text by Ducati Team Press Officer, Chris Jonnum, explains each motorcycle’s contribution to Ducati’s long and rich heritage of racing success.”Take note, though – Museo Ducati only covers whats contained inside the museum – racing motorcycles. Don’t expect to find images or info on Ducati’s other motorcycles, such as the Monster, Multistrada or Diavel.Ducati Museo is available for $39.95 at Bullpublishing.com, Amazon, or various book stores.Following are the details of Museo Ducati:Museo Ducati Book Details:About the Author
American, Chris Jonnum, edited specialty motorcycle magazines for two decades and was the author of The Haydens, the authorised biography of Nicky, Tommy, and Roger Hayden. He is now the Ducati Team Press Officer for Ducati Corse.

About the Photographer
In a career that has spanned 30 years, Peter Harholdt has photographed precious objects for clients like the Smithsonian Institution, the White House, the Louvre, and the Museum of Modern Art. He has been a racecar constructor, has raced in SCCA and IMSA and has taught in racing and high-performance driving schools.

About the Publisher
David Bull Publishing is dedicated to producing the best books in motorsports. Founded in 1995, the company has consistently won praise from readers and the media for the editorial quality and presentation of its titles.