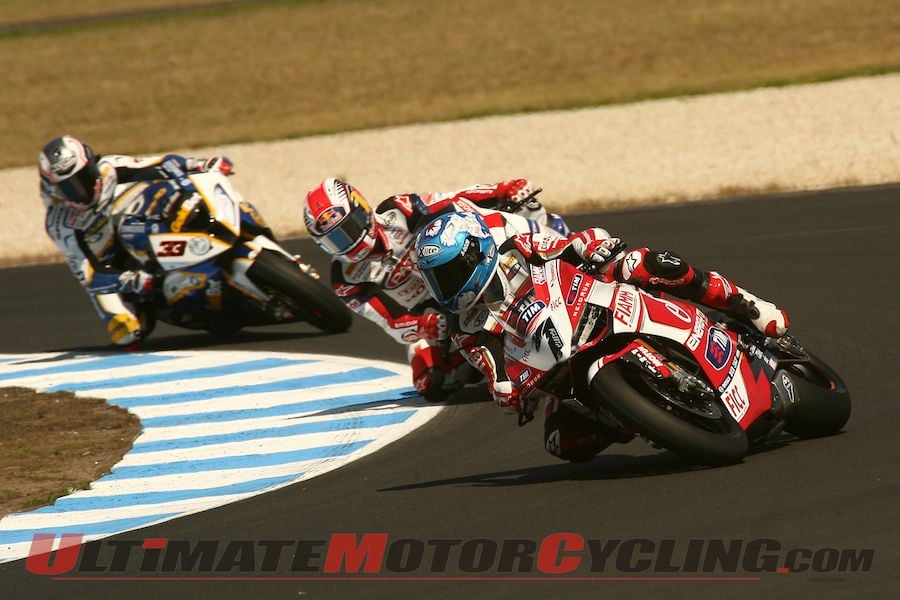 2013 World Superbike Crash ReportIt was an unlucky round one of 2013 World Superbike for Alstare Ducati’s Carlos Checa.The Spaniard started quickly at Phillip Island, round one of 15 in 2013 World SBK, winning Superpole to qualify in the first position. But when the first 22-lap race got underway Sunday, Checa suffered a huge crash.The incident occurred on the fifth lap when the Ducati 1199 Pangiale R pilot was battling with Pata Honda’s Leon Haslam and BMW GoldBet’s Marco Melandri for a podium position.Attempting to out brake Melandri at the end of Siberia, Checa clipped the back of the Italian’s S1000RR, causing both Superbike riders to crash. Melandri walked away unscathed, but Checa suffered a concussion and reportedly couldn’t remember the crash. He was transported to the Melbourne Hospital, where he was under observations.World SBK reported on Wednesday that Checa has left the Melbourne hospital, and is back with family and friends. World SBK says Ducati’s Checa plans to be back at Aragon full of energy, putting the Australian crash firmly behind him.Following Phillip Island World Superbike, Alstare Ducati Team Owner Francis Batta said “to win Superpole yesterday at the first race with this new Ducati was an excellent result and a testimony to all the hard work everybody has  put in. It’s clear that our bike is down on speed compared to our competitors, so Carlos has been having to make up for that on the  brakes and in the turns.“We need to improve our speed so that Carlos and Ayrton can compete with our rivals. This bike is very new for all of us, but we are working as hard as we can and making progress every time we go out on the track. I’m sure we will keep improving and be in a good position to challenge for podiums next time out.”Aragon World Superbike gets underway April 4. For a review of Phillip Island WSBK, click here.