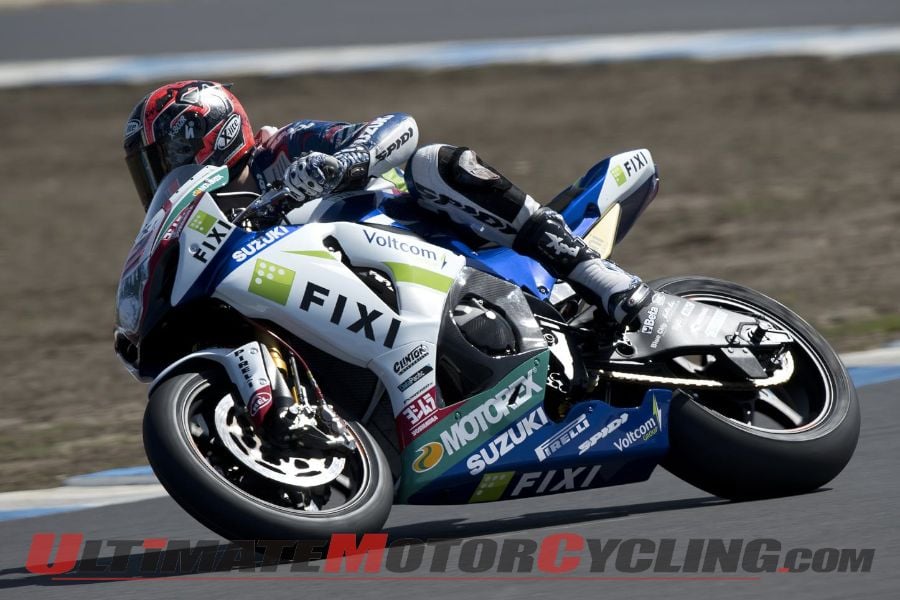 2013 Phillip Island World Superbike Unofficial Test ResultsFollowing a crash-filled, two-day unofficial practice session at Phillip Island, FIXI Crescent Suzuki’s Leon Camier was the World Superbike rider to beat.The Brit posted Friday an unofficial time of 1:31.2 aboard his GSX-R1000, which was a half of a second quicker than the official lap record set by the retired Max Biaggi (Aprilia Racing RSV4) at last season’s opening round.Following a tenth of a second back was Aprilia Racing’s Sylvain Guintoli. Behind the Frenchman were Pata Honda Racing’s Jonathan Rea (1:31.4), GoldBet BMW’s Marco Melandri (1:31.6) and Red Devil Aprilia’s Michel Fabrizio (1:31.7).During the morning sessions at the Phillip Island circuit, Camier was quick on a race tire. But it was later on in the World SBK private testing session – the same pattern that Camier posted on Thursday – when he began to show some quick lap times.But his top time didn’t come without incident; while pushing hard on the last lap of the day, Camier suffered a high-speed crash on the newly-paved (and slick) Phillip Island circuit. FIXI Crescent Suzuki says Cmier lost the front of his machine and saw the bike disappear over the gravel trap and tire wall before coming to rest in the trees that surround the picturesque circuit.Camier walked away unhurt, though the GSX-R1000 was heavily damaged.Leon Camier (FIXI Crescent Suzuki GSX-R1000 Superbike) says: “The day started off really well and we got down to some good times. The bike felt really comfortable, we improved it a little bit chassis wise and the electronics are slowly getting better.“We also did a race run, I was not really pushing it, but just trying to be comfortable and the keep the lap-times consistent. We can still improve the race pace and I think I can do a bit of that through my riding. At the end of the day we had a massive crash when I was pushing for a really fast lap – I just got caught out by the wind. The bike was absolutely totalled, so the boys have got a lot of work to do tonight! Hopefully we’ll be back up to speed as soon as we get back on track on Monday.”

As for Camier’s teammate, Jules Cluzel did not participate due to suffering an elbow injury during a crash on Thursday.

Paul Denning (FIXI Suzuki Team Manager) says: “The high speed of the Phillip Island track, combined with the new high-grip but more unpredictable surface has caught out a lot of riders over these two-days and with two crashes each for our guys, we were very much involved in the carnage!“Jules was operated on by renowned plastic surgeon Dr. Michael Weymouth today and he’ll be able to ride – even if he is a little bit restricted in his movement – in the Official Test on Monday. As a rookie to the Superbike class it’s not good to lose a full day of testing, but he showed huge speed – maybe a bit too much speed – yesterday and we will approach the test next week very calmly and in a step-by-step manner to re-build his confidence. We all have to make sure that we remember that the championship is 15-rounds long and it doesn’t all hinge on what Jules does here at Phillip Island next weekend.“Leon tested alone today and was absolutely flying all day. The bike is working well, the 2013 engine which we’ve developed with Yoshimura is in a different league to what we had here last year, and the whole package appears to be properly competitive. Leon’s 31.2 best lap was impressive, but more important for the team was the superb data we gathered from the race simulation run, in-which Leon kept the times all within the 32-second bracket. Phillip Island is so tough on rear tires, so the consistency bodes well for the race weekend. The huge crash at over 200kmh at the final corner could have put a big dampener on an otherwise positive test, but the sight of Leon up on his feet and basically OK, except for a few bumps and bruises, was a huge relief. We can replace the metal and the carbon fiber, but we can’t replace Leon!”Also missing from Friday’s test were Kawasaki Racing Team’s Tom Sykes and Loris Baz. Both riders sustained injury during crashes on Thursday, but are expected to rejoin the grid Monday for the first official test at Phillip Island ahead opening round of the 2013 World Superbike Championship at the same circuit.2013 Phillip Island World Superbike Unofficial Test Results, Friday:
1. Leon Camier (FIXI Crescent Suzuki GSX-R1000) 1:31.2
2. Sylvain Guintoli (Aprilia Racing RSV4) 1:31.3
3. Jonathan Rea (Pata Honda CBR1000RR) 1:31.4
4. Marco Melandri (BMW GoldBet S1000RR) 1:31.6
5. Michel Fabrizio (Red Devils Aprilia RSV04) 1:31.7
6. Leon Haslam     (Pata Honda CBR1000RR) 1:31.8
7. Davide Guigliano (Althea Ducati 1199) 1:31.9
8. Eugene Laverty (Aprilia Racing RSV4) 1:32.1
9. Chaz Davies (BMW GoldBet S1000RR) 1:32.1
10. Ayrton Badovini (Alstare Ducati 1199) 1:32.2
11. Max Neukirchner (MR Ducati 1199) 1:32.6