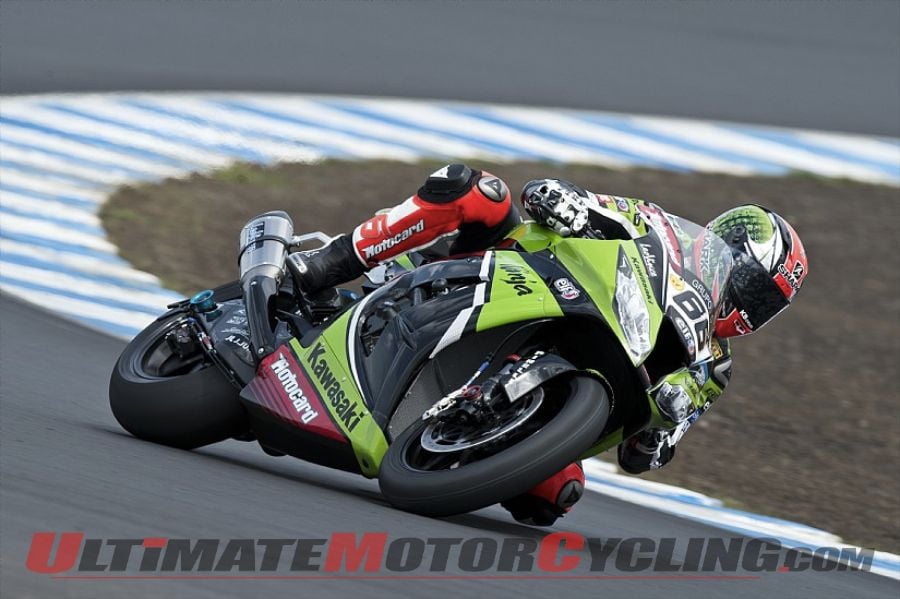 2013 World Superbike Private TestingThe Kawasaki Racing Team didn’t have much luck at Phillip Island Circuit Thursday during the first day of private testing ahead of the 2013 World Superbike Championship.Both riders suffered heavy crashes on the newly-paved surface. Though the riders gained minimal data, both Sykes and Baz opted out of the second and final day of World SBK private testing Friday.During his wreck, Sykes injured his left hand. Initial reports said the Brit, who finished a half of point behind the now retired Max Biaggi (Aprilia Racing Team) in 2012 WSKB, may have fractured his wrist. But following the official medical examination, Kawasaki Racing Team says Sykes “injured” his clutch hand, and will be back on track Monday for the first official testing session at Phillip Island ahead of the first round there Sunday.Tom Sykes (Kawasaki Racing Team ZX-10R Superbike) says: “I hurt my left hand in a crash after less than ten laps of the circuit, so we decided to rest up afterwards so I can be ready for the official tests in a few days.“I do not do much crashing but I got caught out and these things happen in racing. Now we just have to react in the best way to be ready for the next test and then the race. There is no point pushing it because my first flying lap at Phillip Island was nearly into the 1’34s, so I have confidence with my feeling on the bike.“We have a test next week and between Kawasaki and the boys in the team, plus all our technical sponsors, we have made massive progress over the winter, so the bike is ready to go. All we missed out on so far are a few extra laps.”Marcel Duinker (Sykes’ Crew Chief) says: “Technically speaking, we were sorted already with the bike before this test. I believe that we can go well from now and in terms of the bike and the way things have gone in previous winter tests, we should be ready. We did not do so many laps before Tom had his crash but decided not continue. Tom is ready to test on Monday so we will see how much we can do then.”As for Baz, he pushed a bit hard, but suffered a high-speed fall, suffering pain in his back. But just like Sykes, Baz will be back on the track Monday.Loris Baz (Kawasaki Racing Team ZX-10R Superbike) says: “It was my first time here and I like the track a lot. I was going very well for a time but I crashed on corner two after 30 laps. It was a big crash and I want to say sorry to Pere, the team and KHI, and I made the mistake.“I felt some pain in my back and the team decided not to carry on and to use the time to repair all material to make preparations for the two official test days. I’m really motivated to go again so let’s see how we go.”Pere Riba (Baz’s Crew Chief) says: “This was the first time for Loris at this track and right away he was going very fast. It seemed like the bike was working well for him on the settings we had from the Jerez test. We just did laps at the beginning, not trying anything new, to give Loris time in the track. So to be doing 1’33 lap times after only 30 laps was very fast. Then he had the crash, so now we prepare for the next tests.”The first official World Superbike test occurs Monday and Tuesday at Phillip Island ahead of round 1 of 15 in the 2013 Championship.