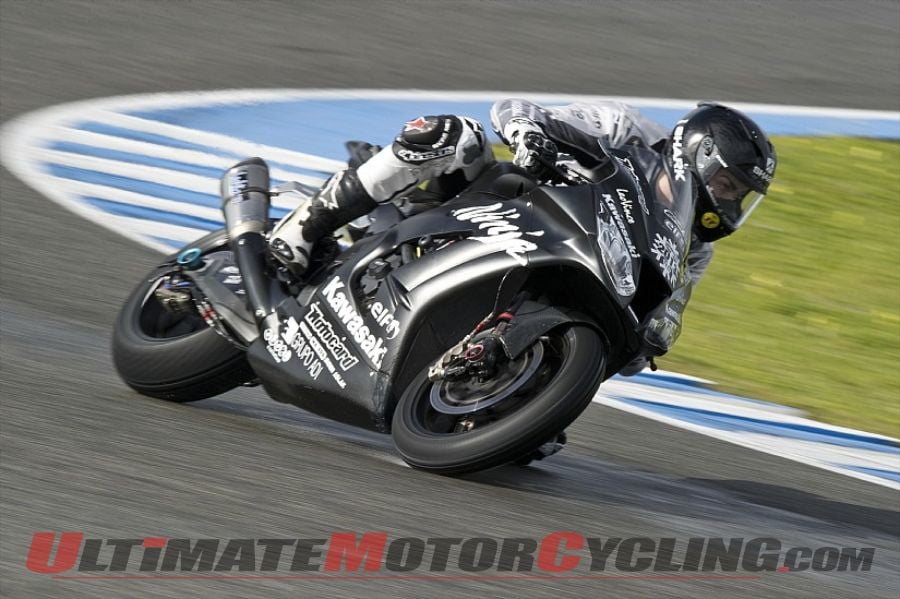 2013 World Superbike PrepAhead of the first official test of 2013 World Superbike Feb. 18-19 at Phillip Island, Australia, the Kawasaki Racing Team will participate in a private two-day test this Thursday and Friday at the same circuit.The Kawasaki Racing Team of Tom Sykes, who finished a half of point behind last year’s World SBK Champion Max Biaggi (Aprilia, now retired), and the newly-signed Frenchman Loris Baz are looking to build upon the already successful tests in Spain late last month. During that two-day Jerez WSBK test, Sykes was quickest aboard the Ninja ZX-10R.The upcoming Phillip Island private tests will occur a week ahead of the first official test of 2013 WSBK next Monday and Tuesday at the same circuit. This will give the SBK grid the opportunity to tune their perspective machines ahead of qualifying Friday for round one of 15 at Phillip Island.Tom Sykes (Kawasaki Racing Team ZX-10R Superbike): “Honestly, I am happy and quite relaxed at the moment. I am looking forward to going to Australia; hopefully I will get a little bit of warmth through my bones.“As always, I am looking forward to going racing. We have done some good winter testing and certainly found some improvements on the bike during that time. The bike also improved a lot after the start of the 2012 season, so knowing that I am very happy to start the 2013 season in Australia.”Loris Baz (Kawasaki Racing Team ZX-10R Superbike) says: “The first Phillip Island test will be useful for me because I have never been there before. I am sure I am going to love the track because everybody loves it and I have seen some great races there on TV. I am sure this is going to be a useful test for me to learn the track and to keep working with the bike to see if we can make another little step forward that will be good for the race.”Guim Roda (Kawasaki Racing Team Manager) says: “The official tests, which happen just before the PI race weekend, only give us limited track time so we decided to do this private test at PI before then to maximise our preparations for the race. We have done a lot of good testing this winter – at Almeria, two times in Jerez and one in Motorland Aragon – which have been useful for our plans for the whole year.“Now we can organize everything knowing what is working or not. We have a clear direction so we can continue on through the year and we are all feeling very positive. Now, at this first Australian test, we will just adapt the settings to the track to make sure we can start in the best possible way.”