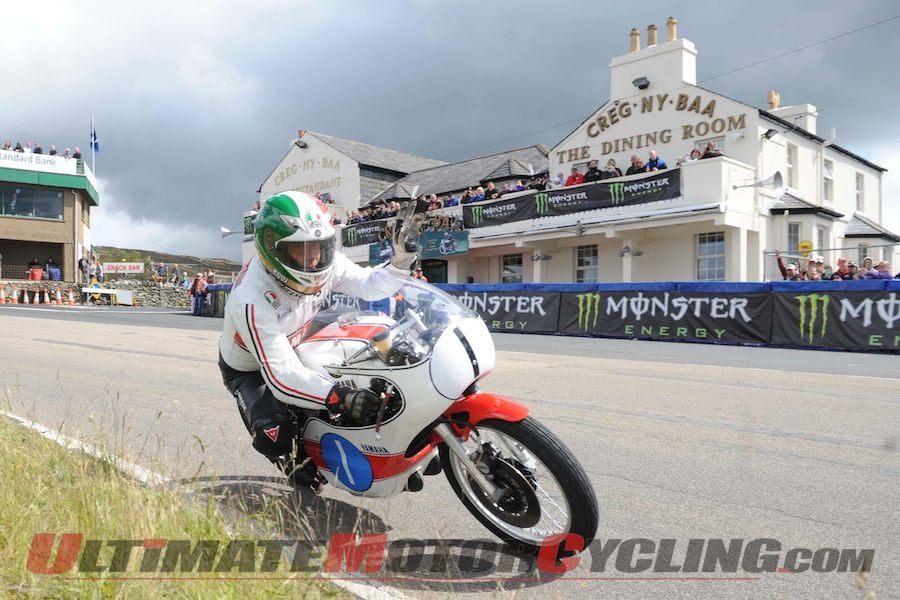 2013 Isle of Man Classic TTYamaha Classic Racing Team (YCRT) founder Ferry Brouwer has announced that after nearly a decade of activity, 2013 will be the final season for the unique team of legendary racing bikes and riders from Yamaha’s golden era. The team’s final appearance will be their first and only competitive race, the inaugural Isle of Man Classic TT meeting Aug. 23-26.The last ten years has seen the team entertain thousands of racing fans both modern and historical with unique Yamaha machines such as the 125 cc RA31A and 250 cc RD05A works four cylinders of 1968, the 750 – two stroke (OW31), the 1979 GP500 championship winning YZR500 and numerous other legendary bikes that have been raced at venues such as the Isle of Man TT and Spa Francorchamps.The team and riders were also a key element in Yamaha’s celebration of 50 years of Grand Prix racing in 2011, putting on a special display at the Assen TT for the MotoGP crowd fans as well as a special parade lap on the Isle of Man around the iconic Mountain Course.Living racing legends including Giacomo Agostini, Phil Read, Rodney Gould, Dieter Braun, Steve Baker, Chas Mortimer, Pentti Korhonen, Jos Schurgers, Svend Andersson and Kent Andersson have all taken to the tracks on their glorious machines.Ferry’s relationship with Yamaha goes back many years to the 1960’s as a mechanic for the Japanese manufacturer’s first Grand Prix World Champion, Phil Read and the legendary Jarno Saarinen. He remained a close part of Yamaha’s early racing days before moving on to found and grow Arai Helmet Europe. He was the organizer of the 1998 Centennial event at the Assen circuit, from which the idea of creating and running a classic racing team emerged.The Yamaha influence on the team grew and changed, until in 2004 it had become solely Yamaha and shortly after became officially supported and recognised by Yamaha Motor Europe and the head office in Japan.Those wishing to see the team in action one last time can catch them at various events during the coming year, with the farewell event being at this year’s Classic TT on the Isle of Man from the 23rd to 26th August. A number of the special machines from the team are under discussion to be taken over by Yamaha Motor Co., Ltd in Japan to become part of their historic collection.Ferry Brouwer says: “Both myself and Yamaha had a strong belief that the iconic machines of the past should not just be on display but also play a part in keeping Grand Prix history alive by running on track. The success of the team, the incredible machines and the participation of the legends who rode them can be attributed to my close working relationship with Yamaha.“It’s a truly sad moment bringing this incredible project to a close. It has been a fantastic experience, working with both the beautiful, iconic machines, Yamaha and these really special riders. We’ve been running a classic racing team since the 1998 Centennial Event, which evolved into the Yamaha Classic Racing Team. It may only be ten years but we have achieved so much and been seen by so many and have much to reminisce about already.”Shigeto Kitagawa (Responsible for External Affairs, Motorsports Development Division Yamaha Motor Co., Ltd and Yamaha Motor Racing President) says: “We know that nothing continues forever in this world but there are no words to express how surprised I was to hear that the Yamaha Classic Racing Team will come to an end this year. The passion with which Ferry filled YCRT after he established it in 2002 and up to the present, and the great efforts offered to the world of classic racing are immeasurable.“We deeply appreciate that Ferry has dedicated more than ten years of his life as a brand ambassador for Yamaha and is a witness to the great history of motorcycle racing.”