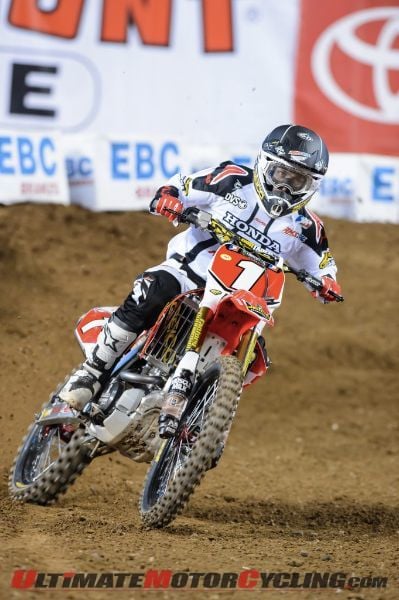 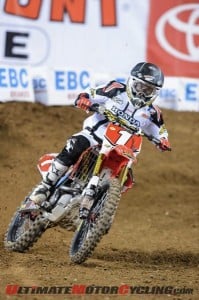 2013 Monster Energy AMA Supercross SeriesDefending series champion Eli Tomac logged a third-place finish Saturday night at Angel Stadium for Anaheim III Supercross to successfully rebound from last weekend’s rare DNF.The podium result, combined with three consecutive victories to start the season, moved Tomac up one spot to second place, helping overcome the fact he collected no SX  points a week ago in Oakland, Calif.Eli Tomac (GEICO Honda CRF250R Supercross) says: “I stuttered a little bit at the start tonight and that cost me. I got bunched up mid-pack around the first corner and had to fight through a bunch of other riders. The guys out front were able to put some distance on me early and by the time I made it up to third place they were too far gone. I rode a little tight as well. I’m not sure why.“The main thing is we did earn some points and we moved up a spot in the standings. We’ve got some work to do but we’re only halfway through the season so there is time.”The race was won by Ken Roczen, who leads Tomac by 20 points in the championship chase. Martin Davalos was second on the night, moving him to fourth overall.GEICO Honda’s other 250SX West pro, Zach Osborne, had an eventful night en route to a 10th place finish. Osborne had a great start in his heat race and was second to Tomac for most of the first lap when he went down hard in a corner section. He stayed down on the ground for several moments before abandoning the race and riding back to the pits.That put him in the Last Chance Qualifier, where he made a couple of great passes to take first place, which earned him one of the final two spots in the main event.In the main, Osborne, who is tied for fifth place, once again got a great start and rode two circuits in fifth place before dropping back a few spots in the middle of the race. Another fall with a lap to go cost Osborne a few more positions.Zach Osbourne (GEICO Honda CRF250R Supercross) says: “Rookie mistakes are killing me right now. I’m not happy with the way I’m riding at all. I need to improve my focus.“Obviously, I had a rough night. I was riding great in the heat and then I just lost the front end. The bike was on top of me and my arm felt dead for a minute so I couldn’t get up in time to rejoin the race. I had a good ride in the LCQ and was doing good in the main but I just blew it again. I’m not happy.”The AMA tour stays in southern California for next Saturday’s stop in San Diego.