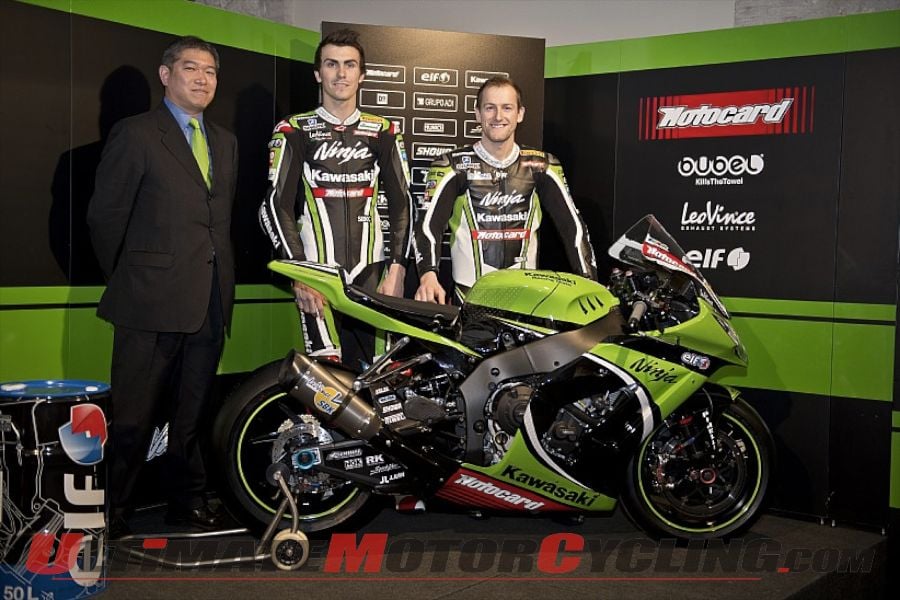 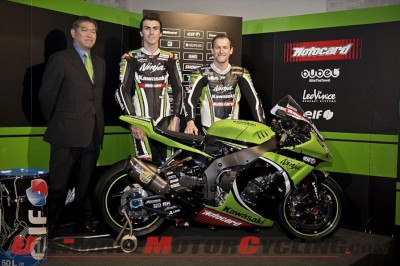 2013 World Superbike ChampionshipThe Kawasaki Racing Team launched its 2013 World Superbike livery and technology package Thursday at the Fostering Arts and Design Institute in the center of Barcelona.The entire team was at the launch, including Team Manger Guim Roda, Kawasaki Europe Director Shigemi Tanaka, Kawasaki Europe Racing Manager Steve Guttridge, and the riders, 2012 championship runner-up Tom Sykes (UK) and Loris Baz (France)Besides unveiling Kawasaki’s plans for the upcoming 15-race 2013 World SBK Championship, the team treated media, sponsors and VIP guests with a presentation of what it takes to turn the ZX-10R Ninja into a proven winner.Next to the official ZX-10R Superbike that will be used in action in 2013 WSBK was a table displaying the upgraded parts laid out alongside the stock parts, helping to show the differences between a WSBK race bike and a road-going machine.Guim Roda (Kawasaki Racing Team Manager) says: “I want to say thanks to the mechanics and the Kawasaki staff, who from the beginning supported us strongly in this project. We have to consider that from the beginning this was a kind of team-building job, which now allows us to explain how we build the bike to take it to the level of competing in the Superbike World Championship.“I also want to say thanks to everybody who has helped us, especially our suppliers, the Motocard family, all the team who have worked to let us be here today and who will help us to have more success in the future.” 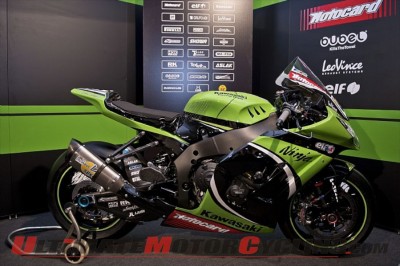 Shigemi Tanak (Director Kawasaki Motors Europe) says: “I am honored to be here to represent Kawasaki Motors Europe and KHI Japan, which are responsible for the World Superbike racing project. Five years ago Kawasaki joined forces with a new and young team called Provec, who managed our World Supersport effort in Europe.“They provided an excellent overall effort for Kawasaki. Just last year the Provec team were rewarded by being promoted to assist our factory engineers in Japan, to develop our official World Superbike racing effort. Technically, the team are at a very high level and all the staff work hand-in-hand with our technical partners around the world to provide a race-winning package – the Kawasaki Ninja ZX-10R.“Kawasaki regards our investment in both the Provec team and the World Superbike Championship as money very well spent. So we are very happy to be here again, in beautiful Barcelona, to launch the official Kawasaki Racing Team and to look at our amazing 2013 Ninja ZX-10R race bike, delivered by Provec. We wish the team, its staff, its riders and everybody involved in the racing program the very best of success over the 2013 season.”The Kawasaki Racing Team will soon head to Australia for the first official practice session of 2013 World SBK at Phillip Island Feb. 18-19 ahead of the opening round at the same circuit Feb. 22-24.