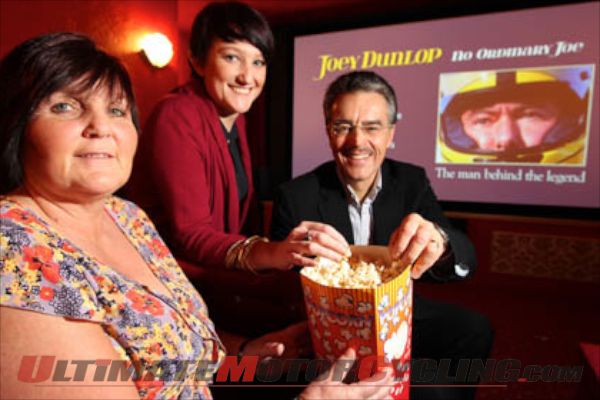 Joey Dunlop – No Ordinary JoeThe wife of Isle of Man TT legend Joey Dunlop has described a new film exploring the man behind the legend as a great honor and fitting tribute.“Joey Dunlop – No Ordinary Joe” is a new documentary about the 26-times TT winner.Linda Dunlop attended the first screening of the film in Northern Ireland on Tuesday. The film will be released on DVD on December 12.Speaking to the TT broadcast partner Manx Radio after seeing the film, Linda Dunlop says “It was a wonderful film, sometimes hard to watch, but a great honor for Joey and a great honor for his family. It is a very fitting tribute to Joey.”The screening was attended by Linda, Joey’s daughter Joanne, former racers Phillip McCallen and Brian Reid, former Honda manager Barry Simmons, TAS Racing team boss Hector Neill and other important figures from road racing and Joey’s life.Also in attendance were director Anna Masefield, producers Alwyn and Colin James of Waldovision and Peter Duke, Managing Director of Duke, which is releasing the film on DVD.Joey Dunlop – No Ordinary Joe reveals the real Joey, the fun-loving family man and charity worker. The new film includes unseen material and additional footage, plus poignant contributions from Joey’s family and important figures from racing, including John McGuinness, Steve Parrish, commentator Richard Nichols, Phillip McCallen, Eddie Laycock, Hector Neill, Barry Symmons and Brian Reid.Never-before-published pictures of the Ballymoney hero, provided from his family’s private collection and fans’ archives, have also been included in the documentary alongside archive footage of Joey competing at the TT, North West 200, Ulster Grand Prix and national road races in the Republic of Ireland. There are also insightful interviews with Joey, never previously broadcast, and a wealth of DVD extras include previously unseen interviews recounting anecdotes from Joey’s life, the recollections of World Superbike star Eugene Laverty and a look around the Honda Museum in Japan.During her Manx Radio interview, Linda adds: “It runs from roughly 1974 up to 2000, different bikes, different sponsors, all different races, all the TT and F1, all together. It is beautiful.”“They have done a good job. They were very easy to work with because they are great people, and there’s a lot of humor in there.”“It was just lovely for us to be involved in it as well because it was good for the children to get involved, it brought back a lot of things for them and the grandchildren who took part in it as well, it was just nice all around.”She said the film reflects the man she knew, a quiet, caring family-man untouched by his fame, and a man who thought nothing of loading a van with essentials and driving across Europe to help children in need.Linda Dunlop says: “We didn’t realize just how popular he was because we were just living with him in an everyday life, just the way families do. It is just now, looking back on it, that it brings it all back, just how good a person he was. It is only now that we really realise just how popular he was with other people.”“We didn’t see it from that side because he was at home with us all the time, we didn’t sort of look at it like that at all. We just had an everyday life as normal.”“He went out to the orphanages about five times, and there was a lot of hard work on that as well. He was a great family man, he did a lot of things for children as well as his own children.”Joey’s youngest daughter Joanne also praised the film.Speaking to the News Letter, Joanne says “There was so much footage that no-one had ever seen before – from close friends and family – and it was so interesting to watch.”“It really brought back what he did for racing, what he did for fans but also what he did for charity. There were tears of happiness and sad tears as well but it was definitely a good watch.”“There has been such hard work put into it. I think the DVD would be a great Christmas present. I would recommend anyone to go out and buy it”Mr Duke says: “We are delighted to be releasing this important film on DVD. It explains the passion fans have for Joey, a passion which remains as strong today as ever, and enriches the remarkable life story of a remarkable man with previously unseen interviews and photos.”“In the year of the big-budget TT3D movie, which is introducing new fans to the TT, it is wonderful to be able to bring out a film made for fans, by fans, celebrating the life and career of a legend who helped make the TT what it is today.”Joey Dunlop – No Ordinary Joe can be ordered now from the iomtt.com shop.