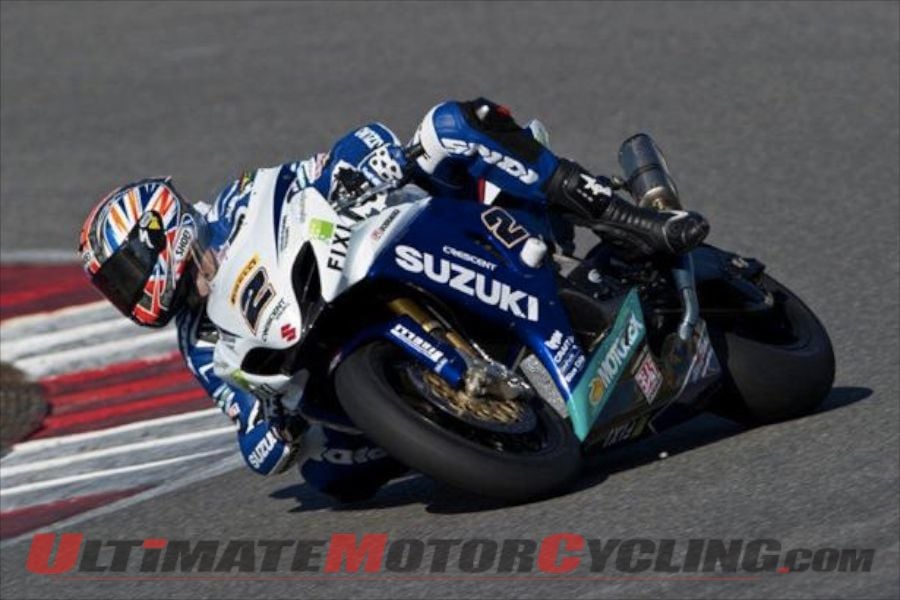 2012 World Superbike PrepAfter spending two years on the Alitalia Aprilia, Leon Camier signed with the newly-formed Crescent Suzuki for the 2012 World Superbike Championship.And just days after the signing was announced, the Brit got is first taste of the Yoshimura-powered GSX-R1000 Superbike.Camier, who will be joined on the Crescent Suzuki team with the American John Hopkins, wrapped up his first World Superbike testing session this week at Portimao. The testing at the 2.915-mile Algarve circuit was the final one before the FIM-mandated test ban that runs from Dec. 1 through Jan. 15.Although the team and Camier struggled with brake problems and setup issues during the three-day test, Crescent Suzuki reports the overall World Superbike test was positive.Once the team figured out the brake issues thanks to Brembo supplying some 2012 WSBK units, Camier worked on tweaking the GSX-R1000’s chassis, and ran consistent lap times (1:43.7) on Pirelli race tires; his second was a second off Eugene Laverty’s best lap on the Alitalia Aprilia RSV4.Suzuki says recently-crowned British Supersport Champion Alastair Seeley, standing in as test rider for John Hopkins as the Californian recovers from hand surgery, was able to work through a huge range of electronic development strategies. On his first visit to the circuit and his first ride on the Crescent GSX-R1000 Suzuki Superbike, Seeley posted an impressive 1.43.5 on the final day of testing.Leon Camier (Crescent Suzuki GSX-R1000 Superbike) says: “Unfortunately we had a few issues throughout the test, which can easily happen with new parts and systems, but I must say I really like the initial feel of the bike. The first day was pretty much lost due to the front brake problem and we had some issues with the new electronics – so there is still a lot to try out still with the chassis to find the exactly right set-up for me.“But at least we now know what needs to be done and we can head in the right direction at the next test, where I hope to get a lot more time out on track to find my ideal setting and post some faster lap times.”Alastair Seeley (Suzuki GSX-R1000) says: “This was certainly a tough track to learn with its many undulations, but I soon got into the swing of things. We didn’t do an awful lot to the chassis set-up of the bike and focussed mainly on the electronics, which just kept getting better throughout. Towards the end the bike felt really good and I managed to post a good time on the soft tyres.“I’d like to thank the team for giving me this opportunity. It was a real pleasure working with Jack, Lez, Russ and Dale.”Jack Valentine (Crescent Suzuki Manager) says: “It was a pretty frustrating start to the test, particularly on Leon’s side. The first day was hampered with a braking issue, and the second saw us struggling with the bike’s firmware. However, once we reverted back to our old settings on Leon’s bike he was able to get going properly. He posted some quick times on the race tyres on day three, after which some mechanical issues put us back again.“He then went on to post a 1:43:7 with the new firmware, which puts him a second off the fastest lap set by Eugene Laverty, but is very close to the rest of the field running in the mid 1:43s. Leon’s done a great job considering he was only able to do 120 laps across the three days and I’m convinced we are going to improve from here on.“Alastair also did a fantastic job and set a very impressive time on qualifying tyres. He was running with the new firmware throughout and kept chipping away, learning both the track and getting used to the bike. Together with the Motec guys we have managed to get an abundance of data which will now be taken away and analyzed and help us tremendously in the next test.“On a final note, despite a few set-backs, the team is bonding really well and I’ll ensure we take all the positives forward. Yoshimura’s support and team spirit was also very welcome and we’re looking forward to 2012 together.”