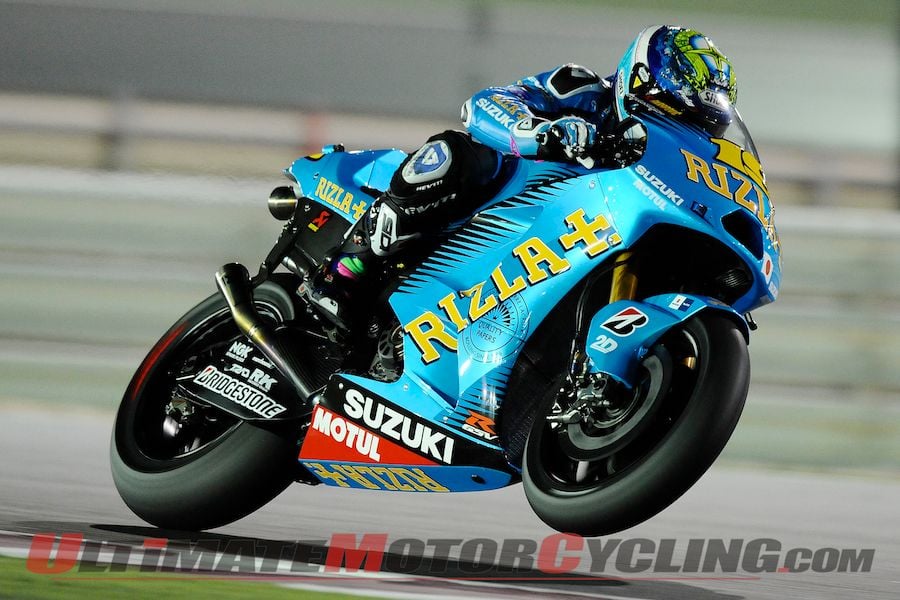 Suzuki MotoGPDue to financial woes, Suzuki has withdrawn from the 2012-2013 MotoGP Championship, the Japanese manufacturer officially announced Friday.Suzuki, which first entered the premier class in Grand Prix Racing in 1974, says it has “temporarily” suspended its participation in MotoGP for 2012, hoping to return in 2014.Suzuki says: “This suspension is to cope with tough circumstances mainly caused by the prolonged recession in developed countries, a historical appreciation of Japanese Yen and repeated natural disasters.”In the meantime, Suzuki says it will focus on “developing a competitive new racing machine” for 2014 MotoGP, and continue its activity in other FIM classes, such as motorcross and road-racing activities that use mass -produced motorcycles, such as World Superbike and AMA Pro Racing.The last championship for Suzuki was in 2000 when “King” Kenny Roberts Jr. took the 500cc title. For the past two years, Suzuki has only fielded on bike in MotoGP, the Rizla Suzuki piloted by Alvaro Bautista.Bautista finished 13th overall in both seasons (2010, 2011). Last week, Suzuki announced that it and Bautista were “parting” ways; it was later announced that Bautista would join San Carlo Honda Gresini to be the only prototype rider on the team, although San Carlo will also join FTR with a CRT (Claiming Rules Team) entry.Now only three manufacturers will contest in 2012 MotoGP – Honda, Ducati and Yamaha; Kawasaki departed from the MotoGP grid following the 2008 season.