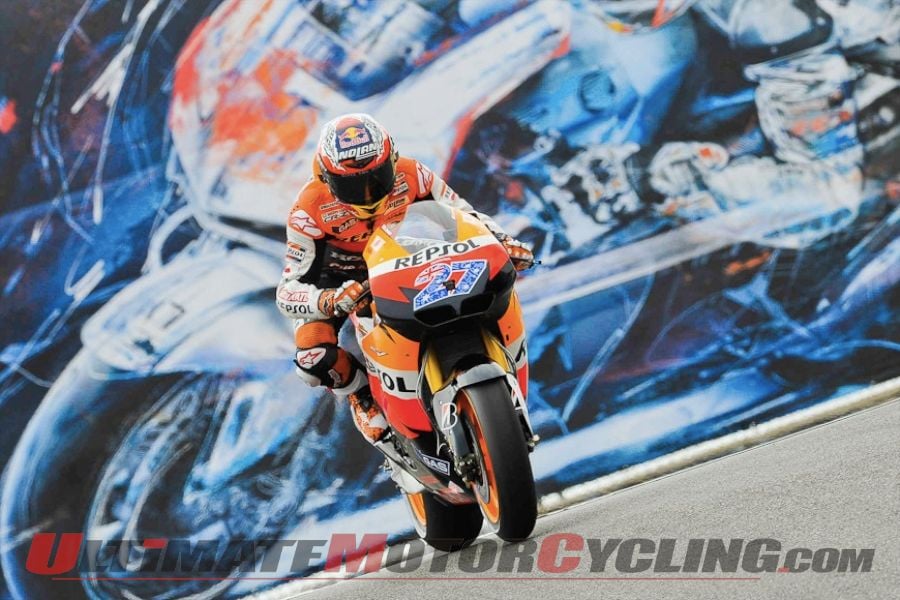 2011 MotoGPJust as in the first two practices for Laguna Seca MotoGP, the third and final session got underway with three riders having over four-tenths of a second advantage on the grid – Repsol Honda teammates Casey Stoner and Dani Pedrosa, and Yamaha Factory Racing’s Jorge Lorenzo.When the 45-minute FP3 session was complete, it was the current MotoGP points leader who was quickest – Stoner. The Australian posted a 1:21.806, which was 0.430 of a second off the circuit record set by Stoner in last year’s MotoGP while competing on the Ducati GP10.Only a four-hundredths of a second covered these top three riders; Stoner was 0.017 of a second ahead of Pedrosa, and 0.049 of a second ahead of Lorenzo.Tge reigning MotoGP Champion suffered a huge highside during FP3, but was cleared by Medical Center to return to the track.Jorge Lorenzo (Yamaha Factory Racing M1 MotoGP) says: "That isn’t how I planned to finish the free practice. I am not sure yet why I crashed, I need to take the video from Dorna and study it as I was not going that fast. "Anyway I am very sore especially in my hip but happy to be uninjured and will still be there to give 100% in qualifying this afternoon. Apart from the crash the morning session was good, the bike still needs more going into the corners but we are getting there."The next five riders posted within a second of Stoner, lead by San Carlo Honda Gresini’s Marco Simoncelli, who trailed Stoner by 0.416 of a second. Next was the fastest American in FP3, Yamaha Factory Racing’s Ben Spies, who was followed by Respol Honda’s Andrea Dovizioso and Ducati Team’s Nicky Hayden.Valentino Rossi was the final rider within a second of Stoner, the Italian 0.841 of a second behind Stoner aboard the Ducati Team GP11.1Rounding out the top 10 were Rizla Suzuki’s Alvaro Bautista and Mapfre Aspar Ducati’s Hector Barbera.Ben Bostrom, riding as a Wildcard entry for LCR Honda, was again 18th out of 18, posting a time 4.128 seconds slower than Stoner.The 18-rider MotoGP grid will return onto Laguna Seca for an hour-long qualifying session at 1:55 p.m. (EDT).2011 Laguna Seca MotoGP: Free Practice 3 Results