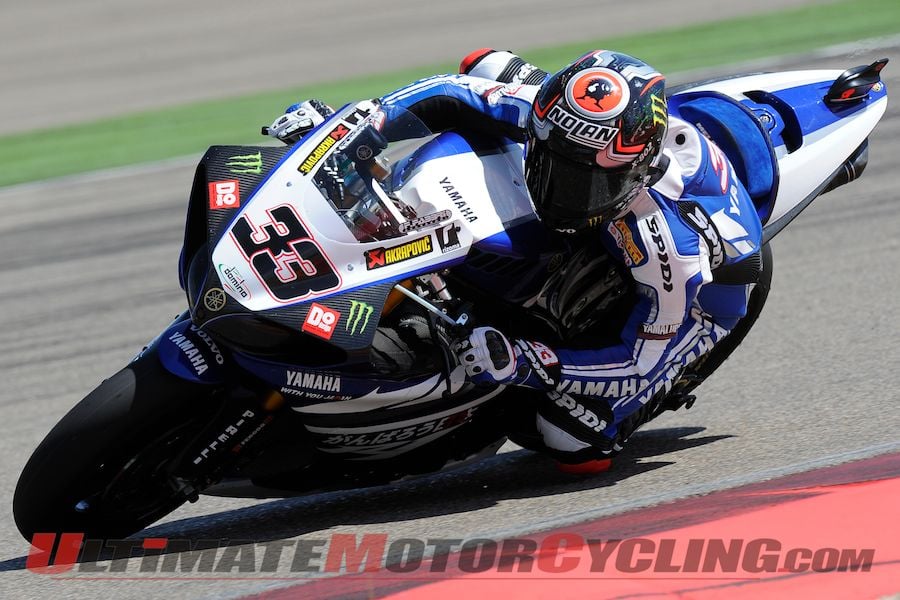 2011 World SuperbikeNot only did Marco Melandri grab his first-ever pole in the World Superbike Championship Saturday, the Italian piloted his Yamaha YZF-R1 to a new track record at Motorland Aragon in SpainMelandri’s impressive lap was a 1:57.634, which he posted on his first lap of the third Superpole session en route to his maiden pole-position at Aragon. Joining the former MotoGP rider and WSBK rookie on the front row will be the Alitalia Aprilia duo of Max Biaggi and Leon Camier, with series’ leader Carlos Checa taking the final spot aboard the Althea Ducati.Marco Melandri (Yamaha World Superbikes YZF-R1 Superbike) says: “This is an amazing day. I really didn’t think I’d be in pole position, especially after the first Superpole where I risked not qualifying. My team has been working harder than ever since Misano and we’ve really come a long way and the bike is working very well.“I’m really happy with today and I want to say thanks to Yamaha and all my team. The race tomorrow will be very difficult and competitive. A lot will depend on the heat of the track and tire wear but hopefully it won’t be as windy as today.”Melandri took his maiden World Superbike victory at Donington, and is currently third in the championship with 150 points.Stay clicked to UltimateMotorCycling.com for Sunday’s race results; also, join us on Facebook where we will reveal when the results are in, but will throw a spoiler alert up in case you don’t want to know.2011 Aragon World Superbike: Qualifying Results
1. M. Melandri / Yamaha YZF-R1 / 1’57.634
2. M. Biaggi / Aprilia RSV4 / 1’57.790
3. L. Camier / Aprilia RSV4 / 1’58.279
4. C. Checa / Ducati 1198R / 1’58.472
5. T. Sykes / Kawasaki ZX-10R / 1’58.641
6. E. Laverty / Yamaha YZF-R1 / 1’58.756
7. J. Lascorz / Kawasaki ZX-10R / 1’59.194
8. A. Badovini / BMW S1000RR / 1’59.591
9. N. Haga / Aprilia RSV4 / 1’58.566
10. S. Guintoli / Ducati 1198R / 1’58.640