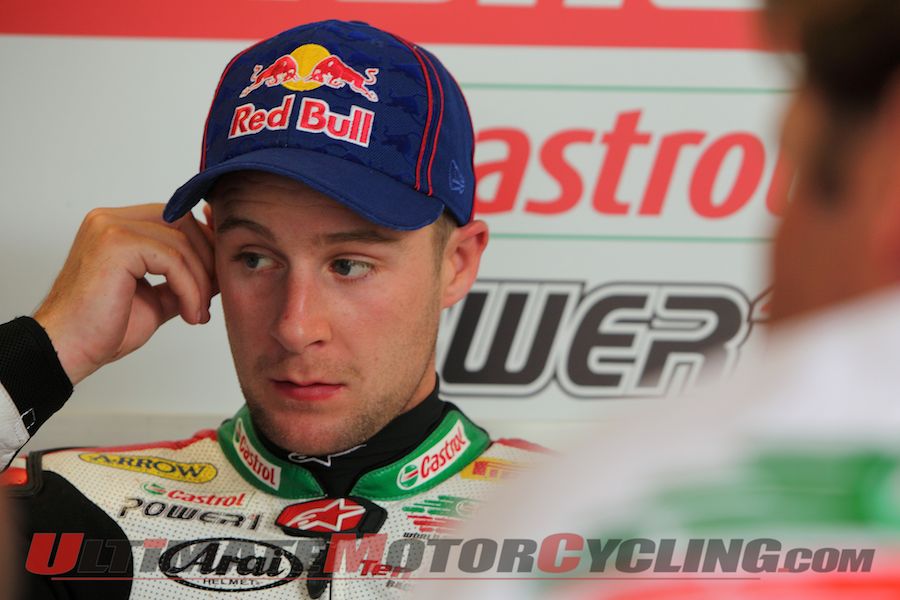 2011 World SuperbikeFollowing his warm-up crash in Race 1 at Misano World Superbike Sunday, Castrol Honda’s Jonathan Rea was initially diagnosed with a fractured radius near his right wrist.But after undergoing surgery in Manchester Wednesday, it was revealed that there was also damage to the scapholunate ligament in Rea’s right wrist. Besides inserting a screw into Rea’s wrist, the surgeons also had to pin the ligament damage, which created addtional time to heal.Upon hearing this news, Castrol Honda reported Thursday that Rea will not only miss this weekend’s WSBK round in Aragon, but he’s “unlikely to be fit to compete at the Brno round in the Czech Republic July 8-10.”Jonathan Rea (Castrol Honda Superbike) says: “I was pretty upset when I got the news after the surgery yesterday because it means a longer rehab than we’d thought. It’s difficult, of course, and I’m devastated, but I’ve got a great Superbike team around me so I know I’ll get all the support I need to come back strong.“As I said before, I want to be 100%-percent when I get back on the bike so, at the moment, I’m not going to put a definitive timescale on that. I’ll just concentrate on getting back to fitness as fast and as completely as I can.”Ronald ten Kate (Castrol Honda World Superbike Team Manager) says: “Well, without doubt, this was not the news we wanted to hear. We had all hoped that Jonathan’s injury was quite straightforward and easy to heal.“Now it seems it is a bit more complicated and will take longer to fix. The important thing is that he takes the time needed to fix it properly because there are still quite some circuits left on the calendar where we know that Jonathan and the bike work very well together. Of course, we have to begin thinking about another rider on the bike while Jonathan is away, but we also need to concentrate on Aragon this weekend and getting the best possible setting for Ruben to compete to his full potential.”Rea is currently eight in the 2011 World Superbike Championship with 94 points; he won a single race in six of 13 rounds, taking first in Race 1 at Assen.