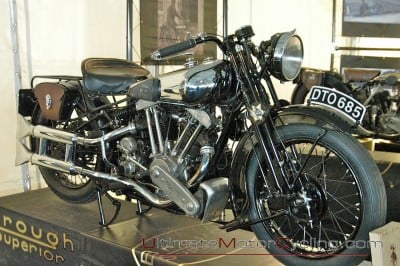 Motorcycles at Pebble BeachSince 1950, Pebble Beach-illustrious northern California golfing playground of the rich and famous-has been hosting the prestigious Concours d’ Elegance, the crème d’ la crème of vintage automobile events. The Concours is known for featuring some of the world’s rarest, and often, most expensive vintage cars in an annual presentation that almost defies description. 2009 represents a bit of change for the stalwart gathering of society’s wealthiest; the people in charge having allowed motorcycles to enter the hallowed grounds.For the inaugural motorcycle event there were certainly the usual suspects you’d expect at an official gathering of two-wheel enthusiasts; a slew of Broughs, a few BSAs, a generous selection of Harleys and Indians, and a smattering of MV Agustas and Ducatis, to name just a few. There were some of the odd machines people have managed to salvage from wonderfully wayward thinking, such as a 1948 Whizzer Custom tandem and a 1952 Cushman ice cream scooter, as well as a host of beautifully pristine Triumphs and Nortons to properly represent the storied brands.Along with the road going fare there were also a grouping of off-road machines, most notably four CZ racing bikes (covering the Czechoslavakian brand’s heyday from 1965 to 1974) on loan from former 500cc Motocross World Champion, American Brad Lackey.A 1929 Brough Superior Pendine Racer greeted spectators at the door to the exhibit. Well, I thought it was a 1929. It turned out to be a 2009. The bike is being built by Brough Superior Motorcycles LTD in Austria for the select few individuals that can afford one of the knock-offs.The machines are true to the original Broughs in every detail, yet assembled from “new metal.” As their representative, Mike Jackson told me, the price will be, “Comfortably into six figures,” however, he was quick to point out, “undercutting the second-hand ones.” The new/rebuild concept represents an excellent opportunity for those impassioned enthusiasts (with plenty of money) that have always wanted to own and ride one of the iconoclastic machines but couldn’t bear the thought of tossing one down the road.The company plans to build just five or six per year, with an estimated build time of nine to twelve months each. To further illustrate the company’s passion and commitment to perpetuating the brand’s legend and status, Jackson explained that the bikes will only be built against pre-orders, adding, “You don’t order one, you have a consultation.” I love it.The response over the weekend was quite positive, rendering the inclusion of motorcycles a success at the Concours’ first foray into the realm. The next logical step will be to broaden the competition and judging to ensure motorcycles get their due in this most prestigious event. 2010 is a good round year.