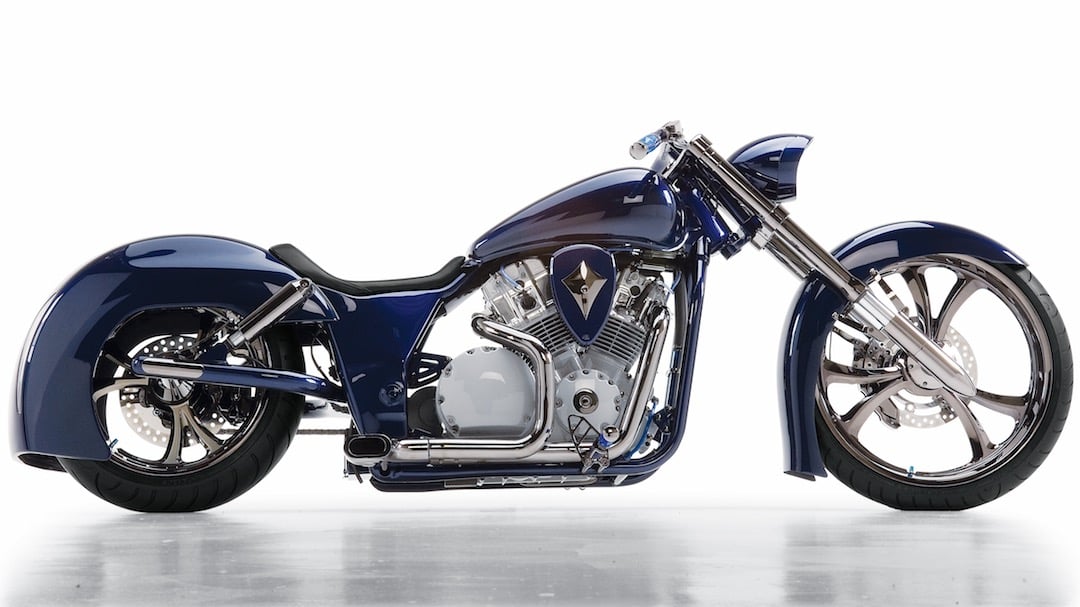 “Accomplishment is about believing in a concept and your ability to follow it through,” says Jim Giuffra, founding partner of world champion metric bike builders AFT Customs. “Credere”—its name purposely chosen from the Italian verb “to believe”—affirms that philosophy. AFT’s rendition of Honda’s respected VTX1300 cruiser embodies Giuffra’s sculptural vision and celebration of the female form.Clothed in its midnight-blue skin, Credere is a panther about to spring. Keeping with Giuffra’s muse, its feline stance is more Venus than Mars, in concept and execution. “The motorcycle’s sensuous curves contain a powerful female quality,” he says. “Not only are beautiful women a great inspiration, we also create motorcycles specifically for women, and women are important members of our design and technical team.”

Giuffra developed his skills as a Honda Trained Technician, honing his craft, and eventually partnering with his best friend, master fabricator Ron Abel. Over the last 20 years, AFT (based in Martell, Calif.) has been their crucible for turning metric cruisers into rolling precious metal.At the 2006 Honda Hoot Metric Cruiser Show in Knoxville, Tenn., AFT’s VT750-based retro Aero Bagger created tremors in the hearts of Hondaphiles. “We don’t want to follow trends,” he declares. “We want to be visionaries.” AFT’s belief in its vision has earned acclaim far and wide, including the October 2006 Grand National Bike Show, where AFT collected first place in the Radical Metric class.With Credere, AFT explores new dimensions. Its seductive midnight-blue lacquer surfaces recall legendary coupés of the 1930s, such as the Bugatti Atlantique and Delahaye 135MS Aerodynamique. “I love those classic cars,” Giuffra adds, “and I wanted to apply that esthetic to a motorcycle.” Credere echoes the era’s flow and flamboyance with its uninterrupted lines; details like the retro Formotion diamond clock in the steering stem; the naked engine’s military-style, flat gray finish; and voluptuous rear fender. (Click image to enlarge)Giuffra credits his Italian heritage for his confluence of sensuality and style. Credere evokes the legacy of Figoni and Falaschi, the leading coachbuilders of their time, whose Talbot Lagos and Delahayes stoke the flame of Giuffra’s forge. “Custom motorcycles don’t have to be about being bad,” he asserts. “They can be a statement of sophistication and refinement.”The choice of the VTX1300 was simple; as Giuffra puts it, “No one else has done it.” Stripping the original of its chrome, AFT imparted its own glamour, starting with the black nickel finished wheels by Weld, with anodized valve stems. “Black nickel has a classy, visual richness,” Giuffra tells us, “so every bolt on the bike is black nickel.”The VTX1300 headlamp was retained; the forks, from an 1800, were lowered and capped at the bottoms with aluminum. The front fender is from an Indian—a nod to nostalgia. The AFT black nickel bars sport body-color matching blue acrylic grips by Cat Eye Customs, which also provided pegs, as well as the hand-formed Pyrex glass tubing directing the bike’s blue coolant. 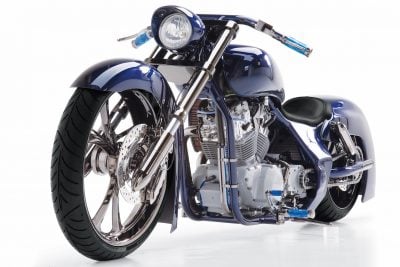 “We work with Kewl Metal produce specific items for the 13PS, like their triple tree set. That allowed us to have a 45-degree rake in the front fork without having to cut or weld anything on the frame,” he explains. “Modifications included converting from shaft to chain drive with a system of rollers, so the chain wouldn’t slap against the frame, a hydraulic clutch, and our own swingarm. When you ride Credere, you don’t feel much difference in handling from the original, even with our 23-inch front wheel and the Big Booty 18-inch rear.” (Click image to enlarge)Credere employs Kewl Metal’s Air Ride system with air bladders, setting ride height and firmness at the flick of a switch. The pipes are by HackerPipes, now making its name with work for Victory and Boss Hoss.To keep the silhouette clean, AFT concealed the aluminum radiator, fan and sensor under the seat, as well as hoses, electrics and the air suspension pump. Giuffra laughs, “That’s an art unto itself.” HHI provided the 6-piston calipers for the left-side brake and rear setup. Duane Ballard’s custom seat is strictly solo. The rear fender, taken from a Rune, pays proper homage.Long-time collaborator Scott Hultquist of Riff Raff Customs was sourced for painting. Every piece of the motor was painted in what Giuffra calls an “old-school  military-gray”; the brake discs and heads were polished for a similar retro effect. One hundred hours were required to give Credere its sumptuous blue hue. “We wanted a simple look without any pin-striping or decoration,” he says. The result is, in Giuffra’s words, “a pro-street look combined with transcendent elegance.”“There’s a new generation of baby boomers who believe metric customs can be just as cool as Harleys,” Giuffra emphasizes. “And they are.”Photography by Mike Chase 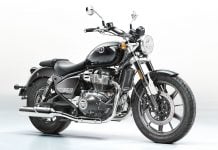