Community Commentary The MotoGP Series | A History to 2005

With Valentino Rossi In The Castrol Honda Superbike Hospitality Tent: The MotoGP Series

Somehow, I ended up in the same corner of the Castrol Honda Superbike hospitality tent as MotoGP World Champion Valentino Rossi and his friends while attending a World Superbike race at Misano, near Rimini and Riccione, on Italy’s Adriatic Coast. I sat a few tables away and watched as Rossi’s party chatted and ate prosciutto, apparently enjoying a relaxed day at the track.

All weekend long, thousands of Italians had streamed past the Honda hospitality area—its windows wide open to the glorious Italian sunshine. Their pace would slow if they spied Honda’s World Superbike–class riders in the tent eating or enjoying a short break, the bravest of their number stopping for a brief moment to take a picture or request an autograph. The flow of human traffic never stopped—until they noticed MotoGP’s Rossi, whose cap and sunglasses failed to keep him incognito. The Italian fans halted suddenly and stood in near disbelief, as if seeing an apparition. They spoke in quick, machine-gun bursts, poking and nudging one another, some of them covering their mouths and pointing at Rossi. 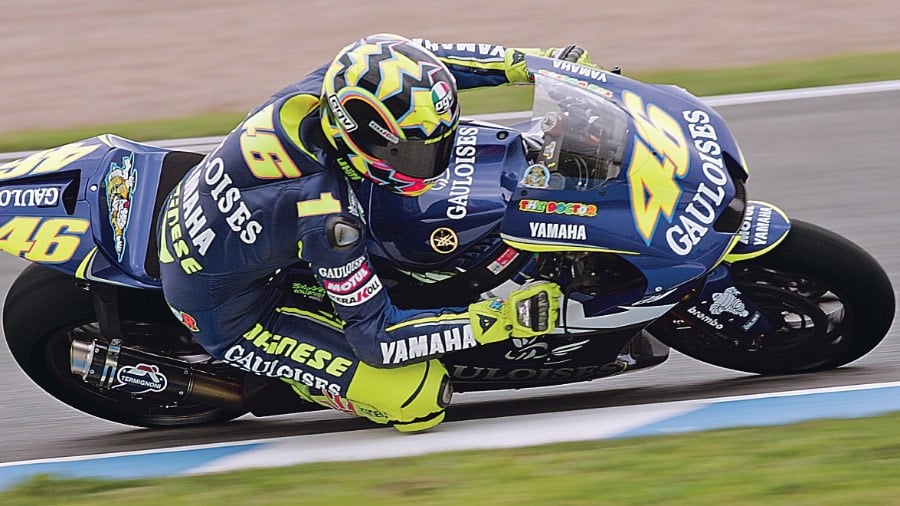 Chaos. In less than 10 minutes, the situation went from being an interesting look at how fans perceive Valentino Rossi to one in which casual bystanders start looking for solid escape routes. No longer walking down the lane as they had before, the fans leaned over the pole-and-canvas wall of the hospitality tent, calling to Rossi, asking him to sign their shirts or begging for his picture.

The crowd at the front of the hospitality area doubled by the half-minute and the poles holding the tent began to push inward from the mounting force. Women cried and small tussles broke out when latecomers tried to elbow their way to the front of the pack. All the while, his fans cried out to him, “Please, Vale, come here. Come to us and sign this! Please, Vale!” Rossi walked over and signed a few autographs only to be engulfed by the crowd. 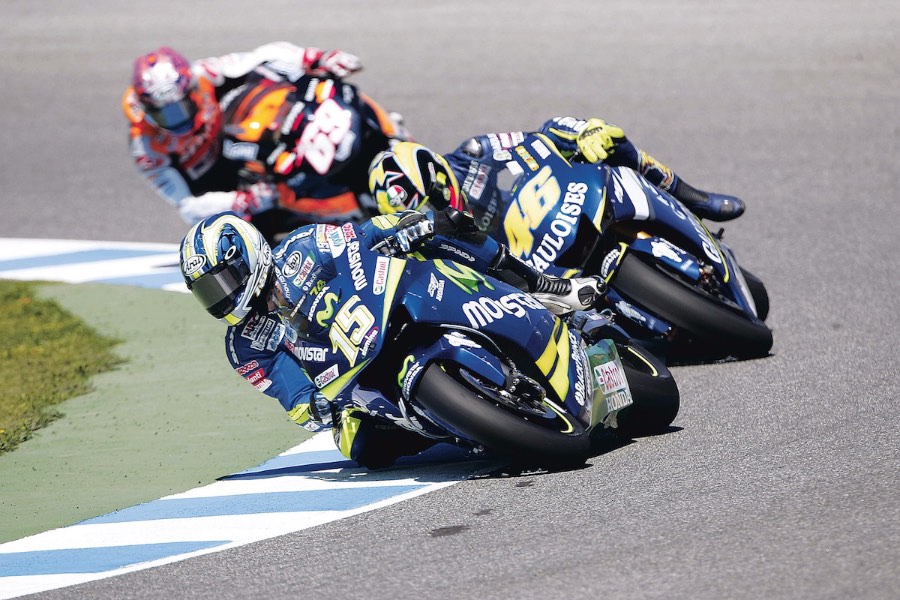 There must have been 500 people there, calling to him, trying to get close to him. His friends, literally, had to pull him away from the clutches of the fans, and Rossi, no longer smiling, quickly exited through the back of the hospitality area. His fans—women, men, children, pensioners—all stood in front of the hospitality tent for another hour, waiting for him to come back, ignoring the repeated statements of the Honda public relations staff that Rossi was gone and they should move along.

From that show of devotion, it became clear to me that MotoGP racing owes what it is today as much to Valentino Rossi as to the series’ key factors of tenacity and horsepower. I’ll get back to Rossi in a moment, but first, let me take you back to the beginning.

It may seem to some that MotoGP is an overnight success brought on by the series’ switch to F1-like 4-stroke engines in 2002; in fact, its current supremacy has been over 50 years in the making. The first Grand Prix—as the series was then known—took place in 1949 at a wonderful little tax haven off the British coast called the Isle of Man. Since then, Grand Prix has generally existed at the pinnacle of motorcycle sport, crowning a champion each season. But, like F1, the glory has come with periodic struggles and power shifts. 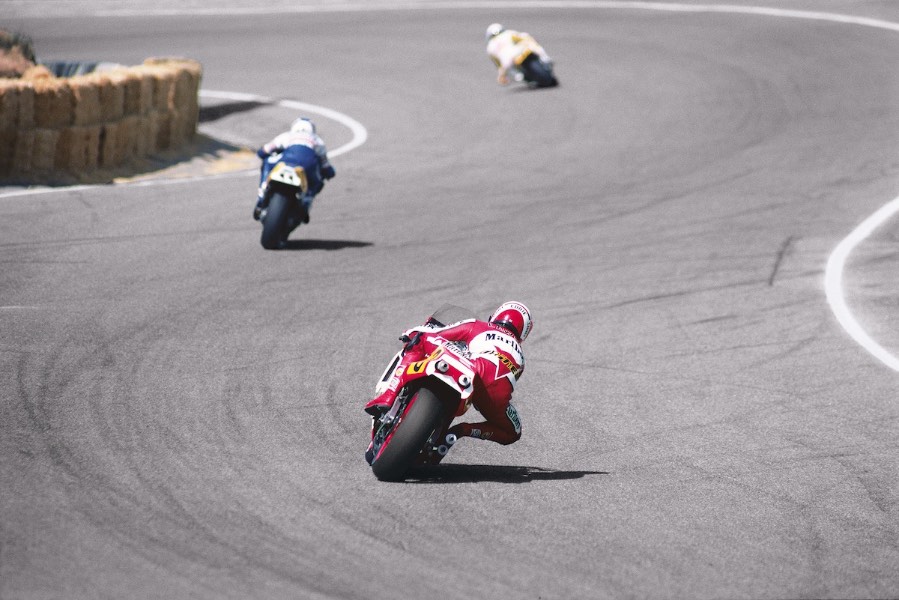 For its first few years, Grand Prix remained exclusively on the European continent, with events held on circuits and street tracks built especially for the purpose of racing. With the limits of the day, if a spectator wanted to see a race at the German Hockenheim circuit, his only option was to attend in person—or wait for weeks to read about it, hoping the article would include photos. While the crowds of the current MotoGP series seem staggering to Americans—200,000 people crowd the hills of the Spanish circuit at Jerez each year—in the 1960s some of the circuits hosted twice that number for Grand Prix events. Yes, 400,000 spectators for a motorcycle race, although it seems unlikely that all were paying customers.

By the early 1960s, Grand Prix evolved into a more international event with races in Japan and the United States. The Daytona International Speedway, home of the NASCAR Daytona 500 race, held a Grand Prix event in 1961, for instance. Then came a break of more than two decades until the Grand Prix motorcycle series revisited the American shores in 1988 at Laguna Seca. Some 100,000 fans dotted the hills around the Monterey, Calif., circuit for that race, and for years it was the most-attended motorcycle race at Laguna Seca—eclipsed only by the 2002 World Superbike event. 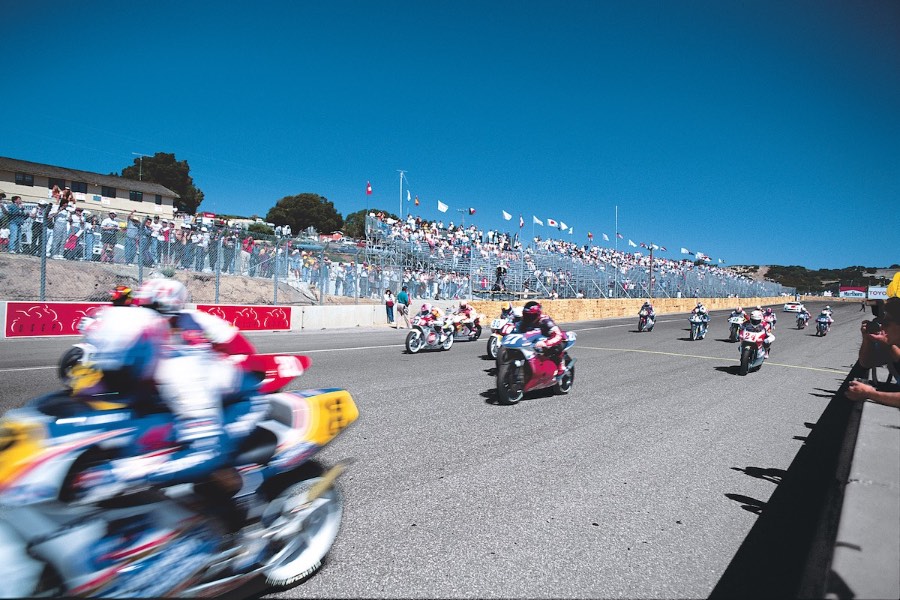 The relatively well-attended Laguna Seca event notwithstanding, while Grand Prix has enjoyed mainstream popularity in Europe, it remains a niche sport in America. It has been a lifelong fact of the series that its superstars have always gone unrecognized by Americans. Even today, Rossi could walk down Anystreet, U.S.A., shouting his own name or wearing his impressive résumé printed on the front of his shirt, and only a few people would know who he is.

While production-based motorcycles proved to be the backbone of Grand Prix in the very early days, prototypes—specially made machines with leading-edge technology—crept in by the 1950s, raising the stakes for those companies yearning for Grand Prix wins. Supercharged BMW twins, water-cooled AJS V-4s, and six-cylinder MV Agustas exploded onto the Grand Prix scene in the seemingly low-tech 1950s. 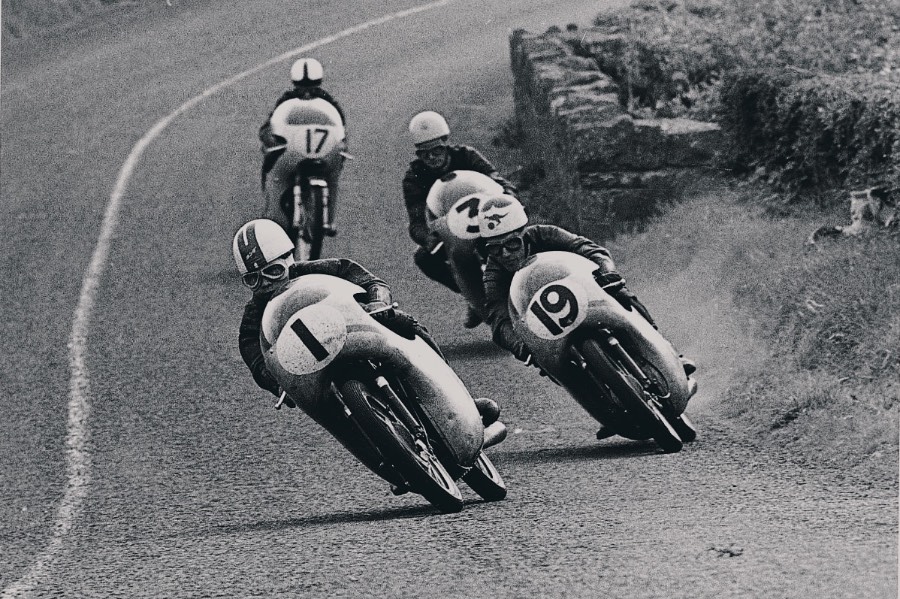 And then a major new force in racing emerged just as the decade ended. Soichiro Honda’s original dream was not to create a multibillion-dollar automobile and motorcycle company, but to win a Grand Prix race with a motorcycle of his own design—one built by his own hands.

By the time Honda started Grand Prix racing in 1959, its enigmatic engineer positioned himself as leader of the race team while simultaneously running the company’s worldwide operations. Though the machines sitting on the starting grids of 1950s Grand Prix series were certainly interesting, Honda’s machines astounded the public. Honda turned out a litany of unique machines for Grand Prix. 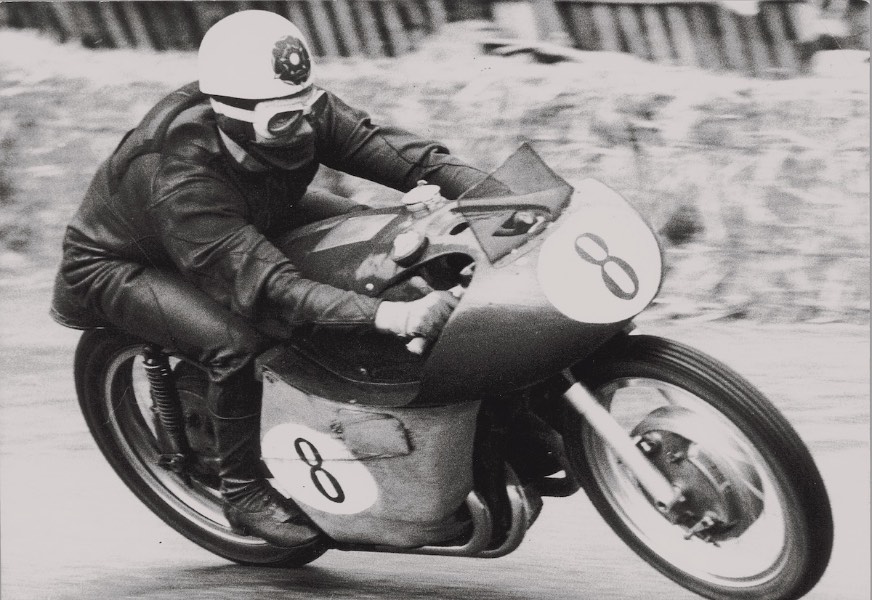 When supercharging and exotic fuels were outlawed in the late 1950s, Honda simply started multiplying power-producing factors. A 6-cylinder 250cc, a 125cc that revved to 14,000 rpm, and a six-cylinder 500cc all followed in quick succession. And, honestly, it wasn’t Honda’s ability to pull these high-tech GP racers out of his hat that stunned everyone; it was that he and his men managed to build brand-new motorcycles before the competition could even decide what new machine they needed for next year.

As a result, Honda became the dominant motorcycle in Grand Prix for the modern era. Four-stroke motorcycles dominated the top classes for the first 20 years of Grand Prix racing, but mimicking the 1960s emergence of Japanese manufacturers in Grand Prix—at first they were regarded as a joke, then contenders, then all-crushing dominators—two-stroke motorcycles followed the same essential arc. 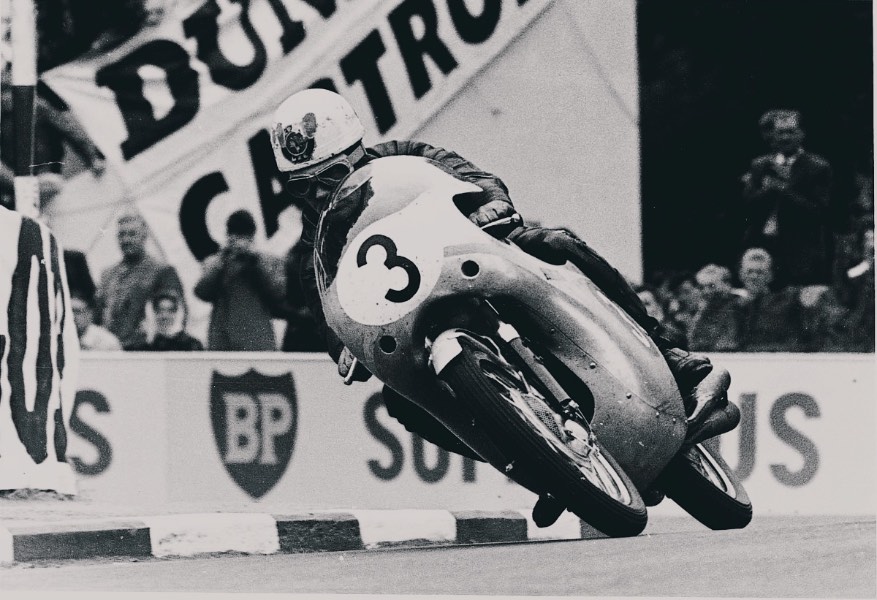 At one point, they were considered laughable little machines that smelled and ran terribly. But, in a few years’ time, if you weren’t on a two-stroke you had no chance of winning. A two-stroke 500—the predecessor of the current MotoGP class—won for the first time in 1971; for the next 30 years, with only one notable exception, 2two-stroke 500s ruled the top class, with in-line-four engines giving way to square-four, V-3, and V-4 engines that produced just under 200 hp in chassis weighing less than 300 pounds without fuel.

The two-stroke machines of the 1990s reached a performance plateau by the middle of the decade. New engine management features tamed the brutal beasts, and some worried that even more performance would be lost with a mandated return to four-stroke engines in the GP series. Four-stroke engine technology had grown exponentially over the previous 20 years, and after a slow start, the four-stroke MotoGP successors took no prisoners in terms of performance. 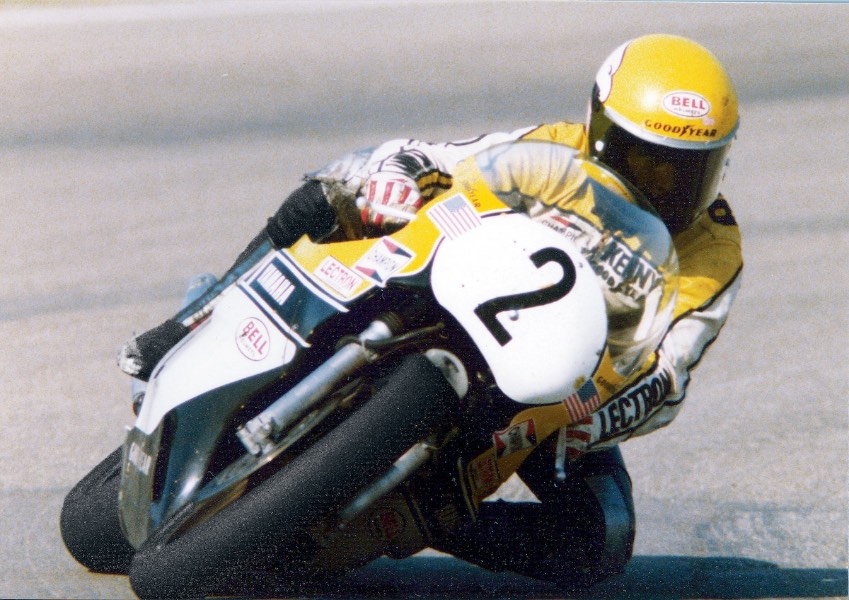 Lap times stagnated for several years under the two-stroke reign, but the new machines eventually snapped all performance yardsticks, setting lap records faster than those set by the two-stroke 500s. The magic top speed number had long been 200 mph; in the early 1990s, Honda finally topped that number. Now your MotoGP bike is slow if it won’t pull a minimum of 200 mph. The Ducati V4 MotoGP bike has set top speed records at several tracks, topping 215 mph.

Though the history, technology, and pageantry of MotoGP offer an indelible foundation for the series, do not dismiss the Rossi factor when examining the popularity of the series today. Rossi, a second-generation Grand Prix rider, has won world titles in all the Grand Prix/MotoGP classes. After an abdication from Honda in 2003, he joined Yamaha, which at that point had established itself as the perpetual bridesmaid in MotoGP. Even Rossi’s teammates predicted he could not win the title on a Yamaha, but of course, he did.

Calling Rossi a rarity in racing is an understatement. Some riders are well liked by their fans and inspire intense devotion even if they never win. Others are so focused on winning that the paddock and the history of the sport are completely lost on them. And still others never develop the cutthroat attitude you need to succeed in world championship racing. Rossi is well liked, supremely focused, and intensely cutthroat all at the same time. He has at least two or three different riding styles, all wrapped up in an impish Peter Pan who is always smiling and nearly always joking. Rossi is not just a rider whose type is seen once in a lifetime, he is completely one of a kind and probably never to be seen again.